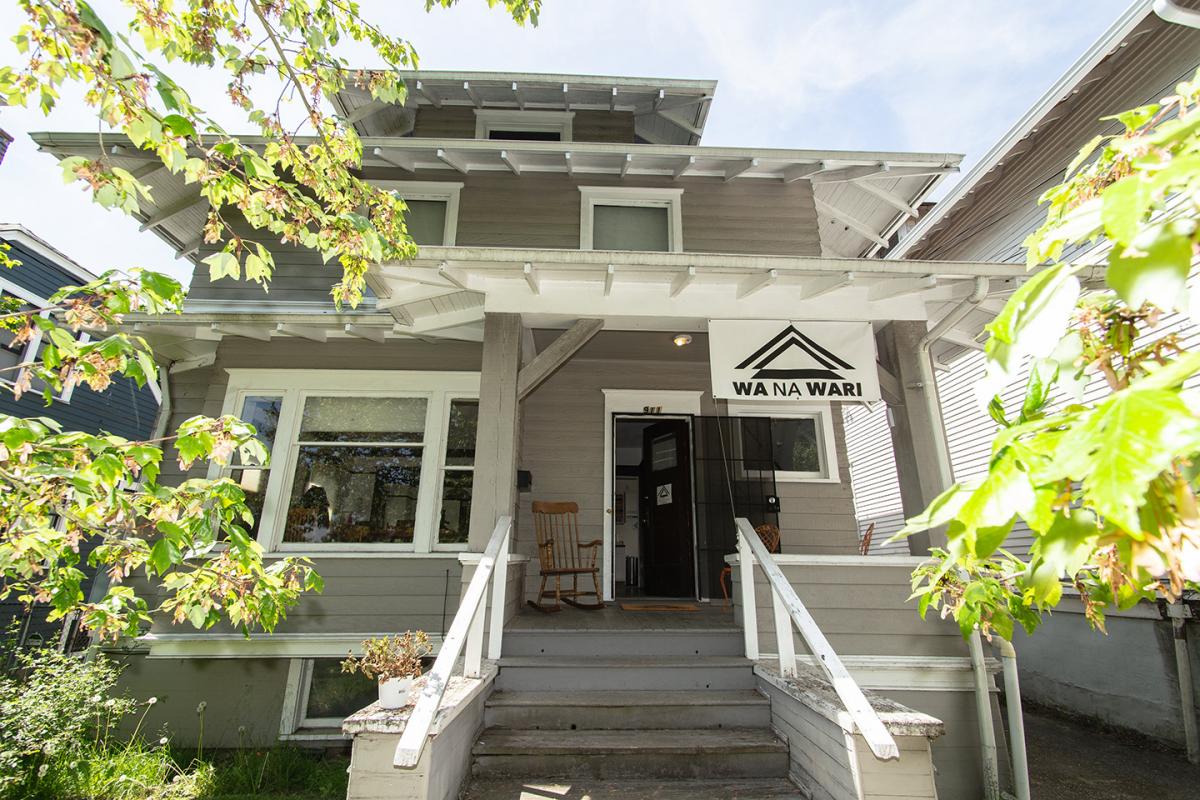 Wa Na Wari is a Black cultural arts center. It's open three days a week, has rotating art exhibitions in the bedrooms and is also a space for performances. Photo by Matthew S. Browning

Along 24th Avenue, between East Spring and East Marion streets, is a block of typical Seattle homes whose history has been preserved rather than bulldozed for sleeker, modern structures. An abundance of trees creates a shaded canopy and it’s common for folks to be outside for a stroll. Among what you’d see is an older gray home with white trim. Two rhododendrons bearing newly blossomed pink flowers are along each side of the walkway leading up to house number 911. A simple white and black sign with the phrase “Wa Na Wari” hanging from the porch is the only signal of the gems that await inside.

Depending on the day of the week, those who stop by are welcomed into the space by documentary filmmaker Jill Freidberg, conceptual artist Elisheba Johnson, writer Rachel Kessler or filmmaker Inye Wokoma. The four have formed an artist collective and created Wa Na Wari, which translates into “our home” from the southern Nigerian language Kalabari. Wa Na Wari is a center dedicated to Black art, stories and connection. Response to what the artist collective has created has been overwhelmingly positive. Johnson said many are wowed as soon as they step inside.

“They always say ‘this is so great’ or ‘this is so wonderful,’” Johnson shared. “The first couple times it happened I said ‘you haven’t seen anything yet.’ They say ‘no, this is here.’ It’s just something about being able to walk into a space and know that it’s a cultural center for Black people that feels embodied as soon as you go through the entryway.”

The first floor is a community area with plenty of comfortable seating. Large windows flood the space with natural light. Several books line the shelf above the fireplace. Visitors can peruse one about Kehinde Wiley, Kerry James Marshall or the catalogue from Onyx Fine Arts’ 2017 group exhibition “Truth B Told,” which was held at King Street Station. Viewfinders throughout the space display photos from the past, such as how 2301 S. Jackson St. has changed from 1938 to today. Images from the Unapologetic Artists and Creatives photographic portrait series titled “The Porch” hang on the wall.

Upstairs, three of the bedrooms house rotating exhibits. The fourth room is dedicated to Shelf Life Community Story Project, which was founded by Freidberg. The project documents the oral histories with current and former residents of the Central District.

Wokoma said Wa Na Wari is a platform for regional and national emerging and established Black artists, giving them the opportunity to be in conversation with one another. Recognizing the different stages of development is important because today’s emerging artist is tomorrow’s established artist. Having a location to present one’s work is an important step in the process. Johnson serves as curator and brings her eclectic taste to the space. She makes an effort to include something for everyone who stops by.

“For me, as somebody working in the arts, there are so few places to show your work. And the process is sometimes laborious to try and figure out how to get your work shown in certain places,” said Johnson. “I really think there is a need for Black art space, Black presentation space, experimentation space.”

Wa Na Wari is also an invitation for people who have left the CD to come back and fellowship with others.

The home itself is one that’s been in Wokoma’s family for decades. His grandparents, Frank and Goldyne Green, initially bought the home in 1951. It’s one of five properties they owned in the area. Family members always lived in the homes, which created an extended network of siblings, aunts, uncles and cousins who all lived close together. Wokoma’s great aunt Bertie and her family lived in the home for several decades. He said there was always a flurry of activity here.

“It was always kind of a community center in that way especially when you add in the fact that those of us who were kids our friends would always come through,” said Wokoma. “We’d be hanging out in the backyard, in the front yard.”

Wokoma’s grandmother owns the home and he manages her estate. It was being rented, but when the last tenants moved out, Wokoma seized the opportunity. The collective took a chance and the community continues to show their support. In two months, they raised more than $20,000 to keep it going through GoFundMe.

In addition to visual art, live performances and a poetry series are on the schedule. Long-term plans include hosting an artist in residence, building a studio and a space for digital archiving. Wa Na Wari is fulfilling an essential need amid the changing landscape of the Emerald City.

Johnson is a Seattle native and describes watching herself and others get priced out of Seattle as painful.

“It’s so hard to even find affordable rent anymore, to experiment and do something that’s even a pop-up anymore,” said Johnson. “I think spaces like Wa Na Wari are even more important in this critical moment while Seattle is wrestling with their identity of who we’re going to be and who deserves to live here.”

In a broader perspective, the converted home is also symbolic to Wokoma as it represents the trajectory of Black people from the South to other regions including the West Coast. They were driven out in part because of racism and with the promise of better opportunities. His family persevered in spite of similar obstacles Black people still face today. The home is the physical manifestation of endurance, accomplishment and history. Wokoma is passing down the lessons to his own children and hopes they’ll be able to do the same.

RELATED ARTICLES:
Unbroken by Bars: Art exhibition brings awareness to the challenges women face when they’ve been imprisoned
Artist Patricia Halsell moves her opening statement from the courtroom to the canvas
Cartoonist Simon Hanselmann shares the complex side of life through graphic novels