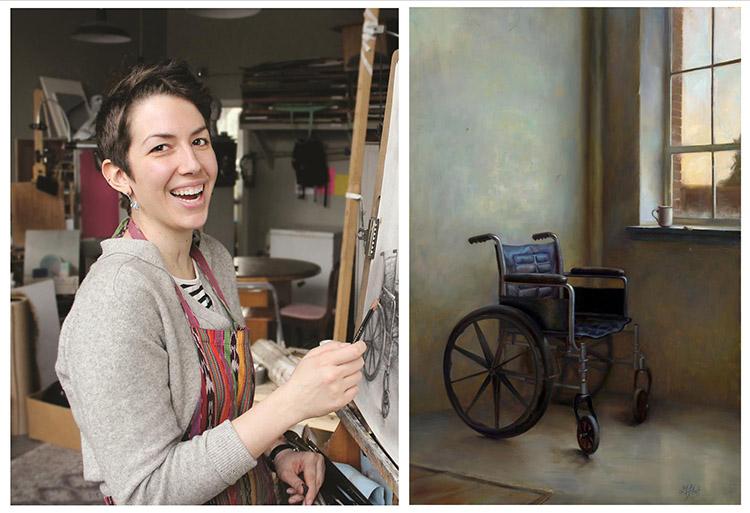 Grace Flott is in the final weeks of studying at Gage Academy of Art’s Juliette Aristides Atelier program. For the past four years, she’s received intense instruction in observational drawing using the language of realism. For Flott, the technique gives her an accessible way to talk to people about her experiences — specifically how she received scars from second- and third-degree burns that cover half of her body.

In 2011, Flott was a student at the University of Washington and studying abroad in Paris at Institut d’Etudes Politiques (Sciences Po). She was 20 years old and had been there for about nine months when her life changed dramatically. She and a few friends were at an apartment hanging out on a weeknight. They were getting ready to leave when they heard an explosion. Flott said a friend got up to check the hallway and when she opened the door, smoke began billowing into the small apartment. They were in a life-or-death situation on the fourth floor.

Flott and her friends jumped. She’s the only one from the group who survived. The next thing Flott remembers is waking up in a Paris hospital. Her injuries included a broken spine, a broken ankle and burns. She was transported to Harborview Medical Center, where she spent two months. Then she moved home to Spokane to recuperate with her family. The initial recovery took several years.

Flott returned to UW to complete her bachelor of arts degree in International Studies and French Language and Literature. She graduated in 2013. Meanwhile, Flott was looking for ways to process the horrific event she experienced. She returned to her childhood love for art. First with painting expressive abstract paintings using oil pastels. Flott found her way to Gage and continued to explore.

“I realized that I was looking for ways to talk about more specifically what had happened,” said Flott. “Also looking for ways of describing what it felt like and what it is like to be a burn survivor.”

Flott said she searched online to try and learn more about the burn survivor community in Seattle, but wasn’t able to find a lot of images or written stories about an experience similar to hers. The artist is now filling the visual void through the ongoing series of paintings titled “Still I Rise.” In “Look at me, down here,” Flott’s empty wheelchair sits empty in a corner. A mug is on the window sill and a used tea bag rests next to it. Flott said there’s a psychological element of being in a wheelchair that puts you physically lower than others that can’t be ignored.

“I feel like I can speak to bigger issues around disability, around just facing a different physical reality than a lot of people face,” said Flott. “I wanted to honor the experience of people who rely on different objects, medical devices, the wheelchair, the crutches, the back brace. Those are all things that I had to use.”

In a self-portrait, Flott stands next to an easel. She’s wearing a black tank top while holding a palette and paint brush. Facing the viewer, the web of burns on her arms are visible. Painting her scars allowed her to claim herself in a new way and she described creating it as meaningful.

Who belongs in art is an issue getting more attention as audiences ask for more inclusivity and are critical of who is telling the stories of marginalized communities. Artist Frida Kahlo’s injuries are well known and centered in her work. Along with Kahlo, Flott is inspired by Riva Lehrer and David Kassan. Lehrer has spina bifida and often depicts people with impairments and the socially challenged body.

Flott continues to stay in contact with the Seattle burn survivor community. Through the organization Phoenix Society, she’s able to provide peer-to-peer support to people who are in the hospital or within the first year of recovery.

Being a burn survivor is an integral part of her personal story but Flott isn’t solely focused on the life-altering event.

“I think we all occupy a multiplicity of identities, so as long as we’re celebrating the whole of everyone, I think that’s wonderful,” said Flott. “This series is to honor that experience but also say, ‘hey, you can move forward.’ I’m moving forward.”

You can view Flott’s paintings in the group exhibition “Works on Paper: Drawing Reality” at Maryhill Museum in Goldendale, WA from June 1 – July 17.