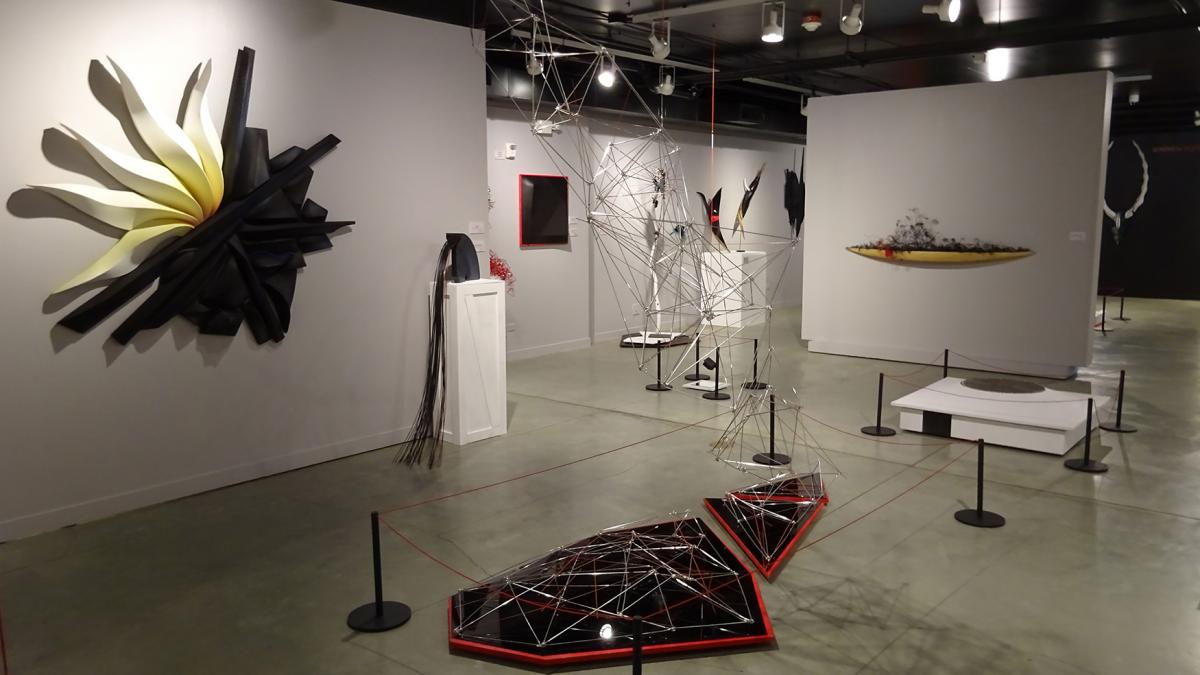 For more than three decades, Warren Pope has worked on perfecting his artistic point of view. Inspiration can come in the middle of the night or, at times, he’ll pivot from one piece to another when a new idea reveals itself. Pope’s work isn’t just expertly executed; he also gives the viewer much to ponder.

“I always say that every artist has a duty to do something besides decorate,” said Pope. “I can’t tell artists what to do but that’s how I feel about it. I’ve invested my whole life into it.”

That’s exactly what he’s done in “Warren Pope: Blood Lines Time Lines Red Lines,” the latest exhibition at Northwest African American Museum (NAAM). He addresses social trauma, racism and violence through contemporary sculpture and mixed media works. The sprawling exhibition includes 71 mostly new works of art. Many are imbued with an element of movement and the titles are just as impactful as the pieces themselves.

“From Cotton Fields to Football Fields” is particularly searing. One side of the canvas is stark white while the other mimics the gridiron. Every Sunday in the fall, dozens of Black bodies entertain legions of fans through feats of athleticism. The majority of football players in the NFL are Black men but when it comes to team CEOs and presidents, they’re overwhelmingly White. This imbalance arguably came to a head with the treatment of former San Francisco 49ers quarterback Colin Kaepernick when he chose to kneel during the National Anthem to draw attention to police brutality. In response, the NFL sent a clear message — Black lives matter only when they’re generating massive profits for the owners. Pope’s comparison is precise.

“The Door of Opportunity has Always been Half Shut” is a white square with a small door in the center that’s partially open. In the mixed media piece “The Dream is up in Smoke,” a small, black house is suspended by red wire. An American flag in the shape of smoke rises from the chimney. “Children die in Drive-bys” shows a cluster of holes going through a black house and around it.

Pope said he’s never believed Seattle was liberal. He points to the success of conservative talk show hosts in the area and the decade-long fight to bring affordable housing to Fort Lawton. Absurdity sparks his creativity.

His point is reinforced through a minimalist style. Pope said he noticed people are quiet when they view the show, even if they’re in a group.

Pope also addresses redlining in Seattle, the discriminatory practice of segregating White people from communities of color and in some cases Jewish people from certain neighborhoods. It’s why Black people were confined to the Central District until the practice ended in the 1970s. The effects are still evident today.

NAAM Curator Hasaan Kirkland said the exhibition came together easily in part because of Pope’s clear narrative and the connection each of the works had with one another. Kirkland credits the artist with inspiring him to come up with the theme and title. NAAM offered Pope a well-earned platform to present his perspective. Kirkland sees the show as inspirational as well as educational.

“If you can accept that this happened and then understand that it’s still happening you should be bothered,” said Kirkland. “To see such a direct lens of this discussion should make you feel some kind of way. If you are the progenitor of these issues, you should feel like you are on notice.”

He went on to say for those who have had to deal with inequity, Pope’s works are a reminder of what we’ve had to endure and the importance of making other generations aware that the problems still exist.

It’s evident Pope is passionate about these issues. He’s lived in the area since he moved here with his parents and siblings at 15. Pope was born in Munich, Germany. His father, who is Black, met his mother there in 1945. Pope was born the following year. The Pope family eventually moved to the states then to Washington when his father was moved to Fort Lewis.

Pope received his bachelor of fine arts from the University of Puget Sound. His intention was to become a teacher but that plan never materialized. Pope worked as an artist and at one point had a kinetic art gallery in the Old City Hall building in Tacoma. He’s inspired by Alexander Calder, an artist known for mobiles and wire sculptures.

Pope said while it may be too late to change society’s ills, he wants to raise the consciousness of people who attend the exhibition and emppower them. Kirkland agrees.

“The hurt is evident and it’s real and we live with it. The cause is often hidden and cowardly disguised by other things,” said Kirkland. “Coming to NAAM to see the show points right at it. And I think that people should come here for that reason to be recharged about humanity, to be inspired by creativity and to be educated about history in a way that will help make our next day hopefully better.”