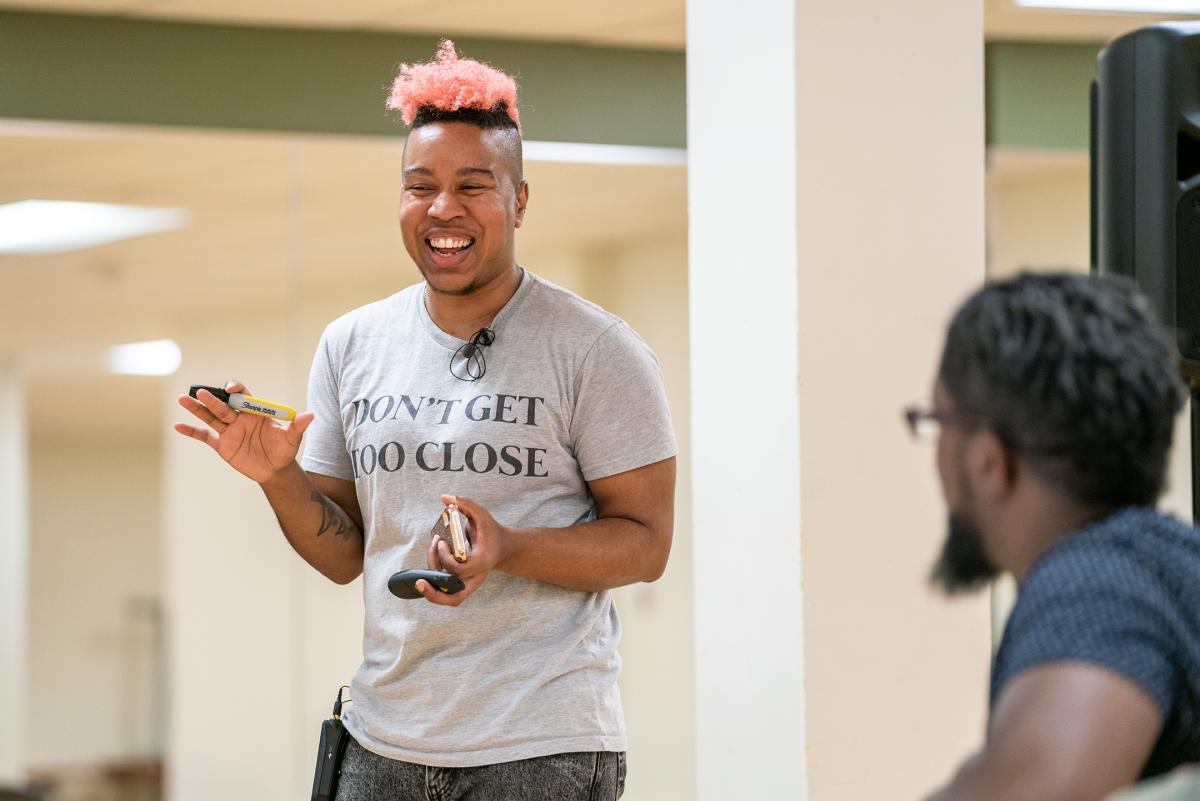 Mase leads an artist sustainability at Langston Hughes Performing Arts Center in the Central District. He’s a poet and educator focused on the needs of LGBTQIA youth and adults. Photo by Jeff Few

On the lower level of Langston Hughes Performing Arts Center, J Mase III stood in front of a small group of people eager to learn about artist sustainability. He wore a gray T-shirt with the phrase “Don’t Get Too Close” on the front, followed by “I’ll Turn You Into Poetry” on the back. It’s a bit tongue-in-cheek, but there’s also a possibility you’ll appear in verse, since Mase’s life is written in many stanzas.

After a brief introduction, statement of preferred pronouns and a slight nudge for more energy from participants, Mase began. The session titled “But Can I Pay My Rent Tho?!: A Workshop On Artist Survival” was a part of the We Out Here Festival, a six-day event in late June aimed at honoring and celebrating Black excellence and sharing resources. He asked the group to think critically about their work; identify themes, their ideal audience and to identify how much time they devoted to their craft. Mase spoke to the group with ease and a confidence rooted firmly in a strong sense of self.

Mase describes himself as a trans, queer poet and educator. In the fall of 2018, he held a TEDx talk in Los Gatos, California, titled “What Coming Out as Trans Taught Me About Islamophobia.” In it, he calls out White “progressives” for choosing politeness over justice, among other issues. He also runs an organization that supports trans and queer artists of color called awQward Talent. Author is another title for the artist. “If I Should Die Under the Knife, Tell My Kidney I was the Fiercest Poet Around” is a collection of poems. “And Then I Got Fired: One Transqueer’s Reflections on Grief, Unemployment, and Inappropriate Jokes about Death” is a self-published book that’s part poetry, has a Grieving Bill of Rights (No. 1: You have the right to cry in public places) and several blessings to trans people. One states “thank you for calling yourself into existence.”

The book can be read straight through or the reader can jump around and absorb what speaks to them. He writes it from the perspective that Black transness is the default, which is an important distinction for him.

“Usually as a Black trans person, oftentimes when we’re writing, we’re writing with the understanding that the people reading it don’t understand our experience,” said Mase. “Which is a waste of time on my end and the reader’s end because I want to believe that people are smart and they can get to a place in which they will meet you there.”

As a full-time artist he travels quite a bit so, he can live anywhere. Three years ago, he left the Northeast and relocated to Seattle. He’s performed at various local events here, the Capturing Fire International Queer Poetry Summit and Slam in Washington, D.C., and he was one of the headliners at the Trans Pride Parade on June 28 with Lady Dane Figueroa Edidi as Black Trans Prayer Book.

Before he became a full-time poet, he worked for nonprofit organizations and in higher education. It was while he was working in the latter that his life took a dramatic shift. Mase had relocated from his hometown of Philadelphia to New York City in the fall of 2012. His grandmother passed away in December of that year, then a few months later, his father died. He’d experienced people close to him dying before and he thought he would bounce back quickly. That’s not what happened. Mase was close with his father, who he called Sir, and the grief manifested itself physically.

“People are like ‘Oh, you know, and the world keeps moving.’ It doesn’t. If you’re actually grieving in a certain type of way, it doesn’t keep moving and you have to really figure out what is even your reason for being on this planet right now, because these are people that are cornerstones of why you exist,” said Mase. “You have to find a new reason to be.”

Mase said death is often never just one trauma. He returned to work only to be fired six weeks after his father died. He shares how it happened in the book and includes a candid haiku for his former boss. Mase read the termination letter twice “because I left my glasses home again and it was hard to read in 10 point font of capitalism” and left the room jubilant. A warm spring New York day awaited him. “I’ll tell you that day was birthed just for me. I think Sir wanted something more from me than me sitting behind a desk.”

Mase veered off the traditional path of work toward freedom. His favorite poem in the book is “Zone of Rarity.” It begins with him recounting a dream where he was cuddling a human-sized platypus. He became obsessed with the animal and connected with the mammal that doesn’t fit into a conventional box of traits. They don’t have teeth, so they use gravel to help break down food, they nurse their young without nipples and their bill is considered a sixth sense. The poem reads in part, “Underwater it senses electrical pulses to find its food and the things that it will prey on / It reminds me of myself and the ways that I sense bullshit and decide what kinds of energy I will or not feed on even when you think I am a joke that my body is weird and strange even when you call me a thing a thing I am not.”

Mase said even at the doctor’s office he’s made to feel that something happening with his body is abnormal, even though he knows it isn’t because other trans people have experienced it as well. He came out as queer at 15, trans at 19 and a couple years ago began medically transitioning. Mase also uses the poem to talk about the legacy of trans people being regarded as spiritual healers, which isn’t common knowledge. “When people like conquistadors like Balboa or other folks would see transgender, non-conforming people, they specifically sought to not just kill us, but anyone that was connected to admiring us or uplifting our value,” said Mase. He brings this up to make the point that transness isn’t new and erasure was intentional. “Despite all that, we still exist. We’re still kind of manifesting ourselves out of our own capacity, our own will.”

Before Janet Mock signed a historic multimillion-dollar deal with Netflix and “Pose” on FX became a hit show, Lucy Hicks Anderson, a Black trans femme living in California from 1920 to 1945 made headlines. Then, there was jazz musician Billy Tipton, and We’wha, a Native American Zuni two spirit who lived from 1849 – 1896. She was an advocate for the Zunis and was known for her weaving and pottery. She met President Grover Cleveland in the 1880s. There are many others who didn’t rise to the ranks of recorded history.

Mase is radical in the sense that he’s living life out loud — not apologizing to anyone for who he is in a society that shuns what they don’t understand. Further, he gives the readers of his books, people he encounters in seminars and anyone consuming his writings permission to just be.

He’s motivated by people, like a teenager he met at an event who wanted to take a picture with him so that he could show his parents there are queer trans Muslims. Mase is also showing targeted communities that art is an accessible method for work and a tool for survival.