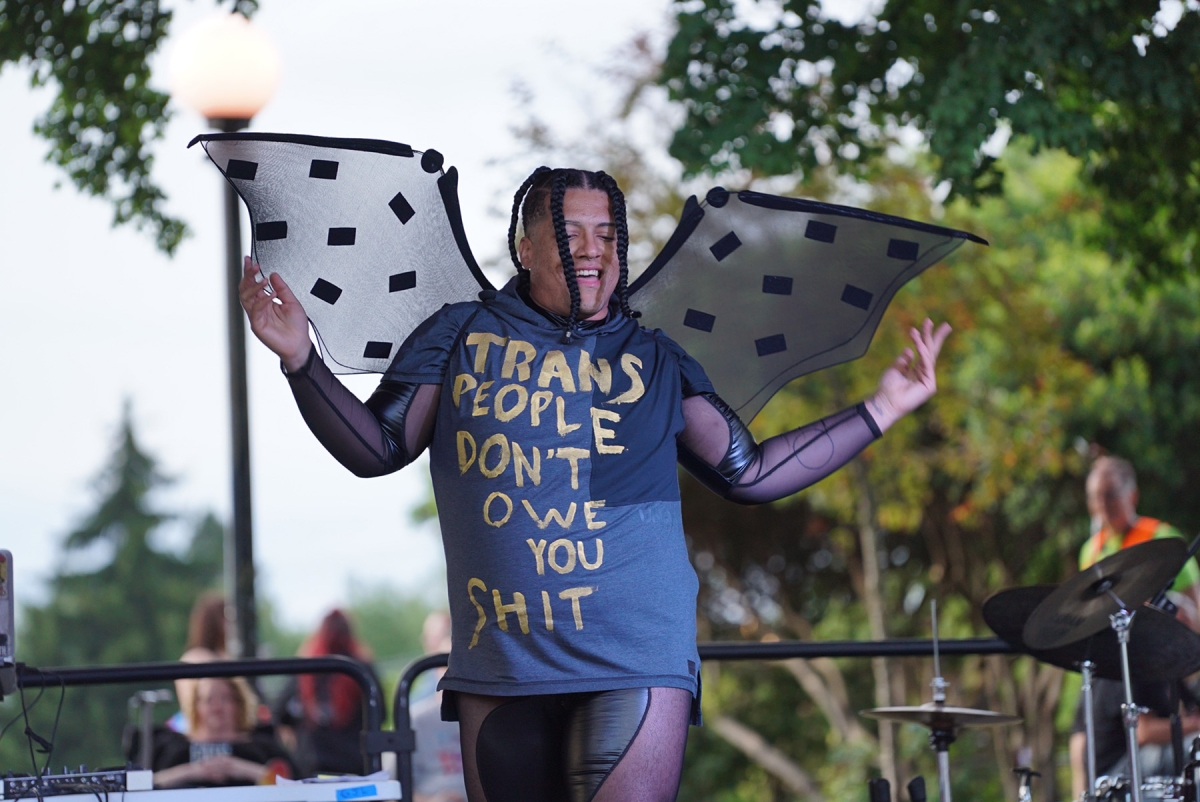 'Stonewall was a riot, we will not be quiet': Thousands gather for Trans Pride Seattle March

Seattle’s trans community and allies came out in force in and around Cal Anderson Park the evening of June 28 for a joyful celebration of identity on the 50th anniversary of the Stonewall Riots in New York, which launched the gay rights movement.

A flood of people marched through the streets of Capitol Hill, chanting and shouting slogans as onlookers filled the sidewalks, cheering.

“Stonewall was a riot / we will not be quiet,” shouted the participants as they marched down 10th Avenue. Another person held a sign that read, “Bricks and rocks not rainbow socks,” referencing the origin story of the Stonewall Riots, where queer people took over the streets of Greenwich Village for three days after police shut down an underground gay bar.

Flanking the march were members of the leather community, there to provide support and protection. In days leading up to the march, there had been reports that an alt-right group called the Proud Boys, designated as a hate group by the Southern Poverty Law Center, would be organizing a counter protest and potentially threatening the event.

Throughout the night, members of the leather community would ring Cal Anderson Park, keeping an eye on the perimeter and communicating through walkie talkies about any possible dangers.

The Proud Boys’ rally was a clear threat to the Trans Pride celebration, said Doug Trainer, a member of the leather community, who was on duty Friday night.

“There were 364 days they could have marched,” Trainer said. “They chose today.”

The leather community was there to ensure that if the Proud Boys or other disrupters came, they would be dealt with, Trainer said.

“These queers can give as good as they get,” he said, a baton hanging from his belt.

Their presence was comforting to Haven Wilvich, who painted a lightning bolt over their eye in blue, pink and white, wore a tri-colored epilex and held a Steven Universe-style shield.

Trans Pride is the event that Wilvich looks forward to, a time that they see their friends and community all together. It’s anti-cop and provides a venue to give services to the community, aspects that Wilvich appreciates. But the event is more than that, Wilvich said. It’s a celebration of gains and a promise to keep fighting.

“We’re here to celebrate the true reason of Pride, which is the liberation of transwomen of color,” Wilvich said.

According to a 2014 report from the Inter-American Commission on Human Rights, transwomen of color have a life expectancy of only 35, more than 40 years shorter than the average resident of the United States of America.

That is in part due to violence perpetrated against the community. According to the Human Rights Campaign, at least 26 transgender people in the United States were murdered in 2018, the majority of whom were Black transgender women. As of June 2019, 11 transgender people had been killed.

Despite of  — and perhaps because of — this wave of violence against transgender people, the community gathered at Cal Anderson Park for a night of music and togetherness.

The event opened with a blessing of ceremonies led by Hiram Calf Looking Sr. of the Black Feet tribe and performed by two-spirit Indigenous people.

The Pow Wow held annually in Discovery Park will, this year, have two-spirit people in the circle.

“We finally get our rightful place,” Looking said.

Musicians took the stage, singing lyrics about empowerment and staking out a space in a world that has been built to hate and destroy them. “You won’t erase me,” asserted one singer. “You call it transgender, I just call it human.”

On the pitch where organizations tabled to offer services, Aria Veronique, Bambi and Haley Debraes were prepping to join the party.

Veronique was a riot of color, from rainbow wig to rainbow eyelashes. It was her first Pride since she’d begun transitioning with hormone therapy. The evening was empowering, Veronique said.

“To see everyone around who’s like me,” she said. “They’re going through their own trials to be happy.”

Bambi had her own reasons that she wanted Veronique to experience Trans Pride.

“I wanted her to come because I wanted to show her that there is no wrong way to be trans,” Bambi said.