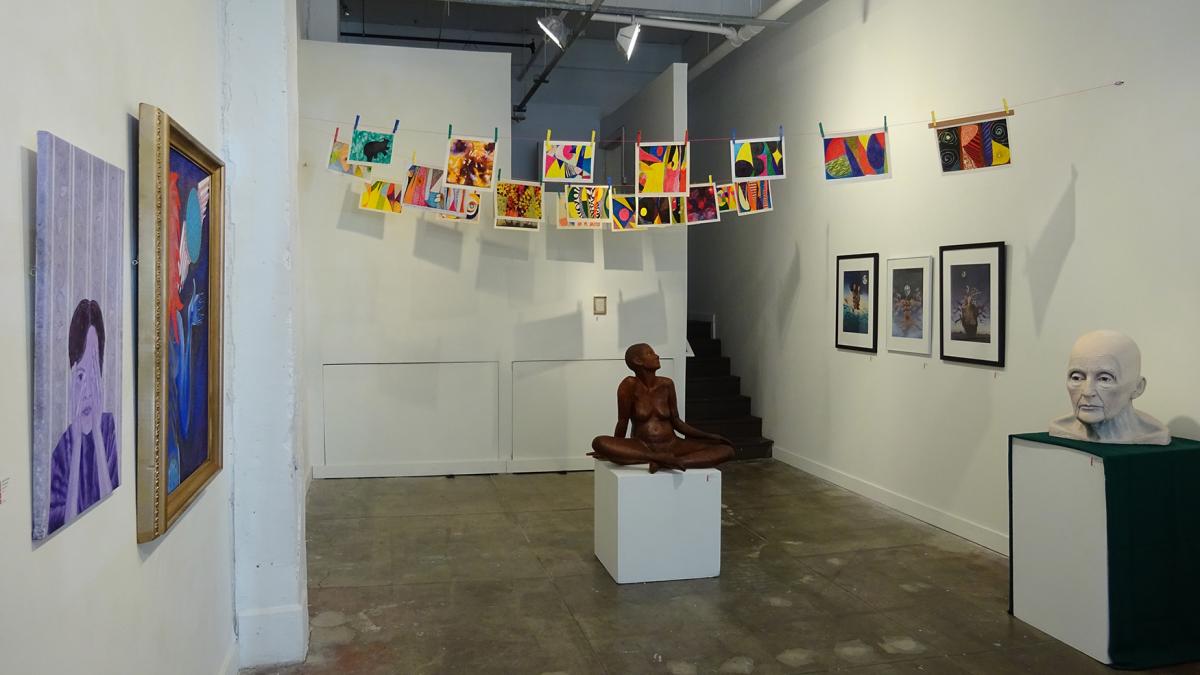 Gallery view of “Old is Not a Dirty Word: Dykes over 50” at CoCA

Not Done Yet: Dykes over 50 revered in CoCA show

In a society that’s obsessed with staying young, the lines of people waiting to erase the lines on their faces by dipping into the restoring waters of the Fountain of Youth would be so long that someone could get old and die just waiting. But there’s always Botox, which is no longer for Hollywood’s elite; anyone can get their face frozen in time by a local doctor. At least one person enjoys the years she’s accumulated: Artist Kathy Ross. She has no qualms about being 70.

“I wouldn’t want to be young. I mean, I might like some of those joints,” said Ross. “I’m happier in the last 10 years than I ever was since I was a kid.”

Ross is one of nine artists displaying work in the show “Old is Not a Dirty Word: Dykes over 50” at Center on Contemporary Art (CoCA) in Pioneer Square. The group exhibition showcases older lesbian artists who are still actively creating — whose homes are brimming with art. The show is curated by artist Lamar Van Dyke. When she turned 70 a couple years ago, she began calling herself old. The responses she received ranged from “You’re only as old as you feel” to “You don’t look old.” The insinuation was clear to Van Dyke. Naturally, she turned the idea into the theme for an art show, inviting others she knew who were at a similar stage in life.

Ross described growing older as a mixed bag. She finds herself having the conversation about age often. She also thinks about dying a lot more. Ross isn’t scared of death — she’s concerned about the dying process.

“Partly, I’m really happy with being kind of invisible to people now; and partly, I’m really insulted by it. So that combination,” said Ross. “The thing that I really hate is when people call me a young lady. That is so massively insulting.”

One age-related adjustment Ross has happily made pertains to her art. Now that she’s collecting Social Security, she’s able to create with less pressure. Ross no longer worries about making a sculpture that will sell and can take more time if she needs to. “Tin Tree,” is one of the works on display at CoCA. It’s an ornate, 5-feet-tall sculpture with many nooks and crannies and surprises within its limbs. Ross prefers to take little things to make one cohesive work. About 10 years ago she switched from working with bronze to tin.

“I wanted something kind of a little sloppier and less technical,” said Ross. “It takes just as much time as bronze, but it’s something you can do in your own studio. It doesn’t have to be collaborative.”

Ross’ current body of work is influenced by her surroundings. Her home sits on several acres on Harstine Island in Mason County. She’s set aside a thinking spot in the woods, which allows her to center herself each day.

Other works in the show includes Zoe Harris’ acrylic-on-board paintings, depicting three seasons — fall, spring and summer. In “Summer,” a woman’s face is partially obscured by a network of tree branches while colorful butterflies flutter above her head. Harris is 61 and lives on the Colville Indian Reservation in Nespelem. She worked as a graphic designer/illustrator. For 15 years, she was the lead scenic artist at the Seattle Opera. In her artist statement, Harris said she’s now able to create on her own terms and is basking in the newfound freedom. Her work now focuses on site-specific land art, “Age aside, I will always look for new ways of expression because in my soul I am still the kid with busy hands.”

Van Dyke has three paintings in the exhibition. Before she used acrylic to bring her images to life she used ink: She was a tattoo artist for 20 years. For 18 of those years, she ran her own shop, Tattoo You, off Pike Street in Capitol Hill. When it opened in the early 1980s it was the third tattoo shop in Seattle. She sold it because it was time to move on and, by then, the shop was one of 36. “Over Here” is modeled after the spirals she tattooed on the backside of her client. In the painting the woman is transformed into a goddess sending humanity into the universe.

“When I did that painting, I think my horizons were opening up and I was getting a bigger perspective on everything that was happening,” said Van Dyke. “It just felt to me like things were more cosmic and things were so much bigger than I had been able to comprehend or even imagined.”

In addition to challenging the definition of the word old, the exhibition also intentionally uses the word dyke. Van Dyke is proud to call herself one. So much so that decades ago she changed her birth name, which was Heather Elizabeth Nelson, to include it. It combines her childhood love of Hedy Lamarr with her time in the 1970s when she traveled around the country with a group of women in a calvalcade of vans. At the rally before the Seattle Dyke March on June 28, Van Dyke belted out the song “I Enjoy Being a Dyke.” The tune begins with the lyrics "When I see a man who's sexist / And he does something I don't like / I just tell him that he can fuck off / Because I enjoy being a dyke." Today it’s a tradition met with cheers and applause but it got her and three others arrested in 1974. Van Dyke said they became known as the Brunswick Four and the event became a significant gay turning point in Canadian “herstory.”

Van Dyke said they reclaimed the word dyke and gained a lot of power and strength in doing so.

“In my mind it’s a word that describes a certain kind of woman,” said Van Dyke. “It’s a woman who is not overly femme. It’s a woman who takes up a lot of space. It’s the woman who states her case. You know it’s like there’s a whole breaking-through-barriers thing that we did when we reclaimed the word.”

To further illustrate the point that older women are still vital, a fashion show is planned for the monthly art walk on July 11. They’ll be wearing handmade burlesque outfits that Van Dyke described as spectacular.

“Old is Not a Dirty Word: Dykes over 50” is an exhibition full of well-executed and intriguing works. While they were grouped together because of their age, each artist holds their own and presents worthy perspectives.