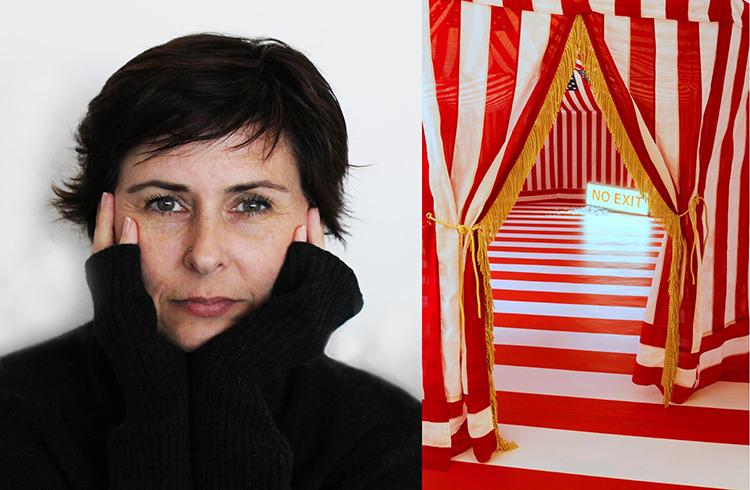 "The Greatest Show on Earth” installation from Holly Ballard Martz is a showstopper. She spent two months diligently sewing dozens of American flags together to create a 30-foot circus tent. The installation included red and white striped vinyl flooring and a “NO EXIT” sign. Her statement on the current state of U.S. politics is incisive. Elected officials aren’t wearing sequined outfits and walking literal tightropes but it’s hard to shake the feeling many of us are stunned audience members of a horror show.

Martz started working with flags after the election of 45. She bleached the symbolic colors in the first and titled it “whitewashed.” It’s a reference to the ultimate goal of White nationalists. In addition, the modified flag addressed the whitewashing of history and the false narrative that this country has always been equal opportunity for all.

“The red, white and blue is known throughout the world as a symbol of liberty and justice for all, which it doesn’t live up to,” said Martz. “If you’re not going to live up to what it’s supposed to symbolize let’s just take all the color out and it’s just a worthless piece of fabric.”

Reconfiguring the flag can draw the ire of some, particularly those who have served in the armed forces, but for Martz it’s not meant to disrespect their service.

Calling out the hypocrisy of the American government isn’t the only sensitive subject matter Martz focuses on; add mental illness, gun violence and racism to her portfolio as well.

The multimedia works “I don’t see color (black)” and “I don’t see color (white)” are modeled after the Ishihara color blindness test. Rather than asking viewers to find the green number embedded in sea of red and orange dots or red colored number within green dots, she’s used the words “black” and “white.” Martz is tackling the notion of color blindness as it relates to race. When someone states they are colorblind, it’s used to signal they aren’t racist; everyone they encounter is judged as an individual. But the phrase is problematic and as Martz points out, it gives people an easy out.

She used a vintage x-ray viewer for the works and has used the medium for other pieces. Martz likes the idea that x-rays show us what’s below the surface and they illuminate what we wouldn’t otherwise see.

She manipulated more than 100 wire hangers to create the installation “danger of nostalgia in wallpaper form (in utero).” The hangers form the female reproductive system. Set against a cerulean backdrop it appears to be an inverted quatrefoil pattern from afar. She designed it to draw people in with its beauty and when they get close enough, they’ll understand the point. The work is timely, as several states have passed restrictive abortion laws. The installation will be on view in the space for ZINC contemporary gallery during Seattle Art Fair at the beginning of next month.

Fifteen years ago Martz made the decision to focus on being an artist. She’d already earned a bachelor of fine arts from the University of Washington with an emphasis in printmaking so the move was more of a return to what she already loved. While juggling being a wife and the mother of two daughters, Martz began with painting crows, houses and giant balls of string. She described those early works as psychological and coded. Martz was depicting her anxiety. In 2011 a family crisis shifted her work. She said her oldest daughter was struck with debilitating depression and tried to end her life twice. Making art helped her cope during those dark times as well as eventually talking about it.

It became a turning point and Martz ventured into explicit visual analysis. In the piece “lunaticus” she uses croquet mallets to address grief and depression. The four mallets mimic the lunar eclipse. She said the light is always there, it’s only temporarily covered by a shadow. It’s also a play on the etymology of the word lunatic. There used to be a belief that the moon caused intermittent insanity.

Given the state of current events, Martz won’t be running out of inspiration for her social-justice themed works anytime soon. After shouting at her television at the latest atrocity, she channels that emotion into artwork. Martz wants her audience to see the humanity in all of us and to stop the othering.

Martz is realistic about her impact. She doesn’t have grand illusions her art will change the world, she’s more focused on a smaller footprint.

“If maybe the veteran who didn’t want to come into my circus tent,” said Martz. “Even though he was objecting to it and was upset about it maybe in conversation with his wife who did appreciate the message maybe it might shift his thinking about the flag and its representation and how we use it.”

Now that she’s a full-time artist Martz has no plans to ebb the flow of her work. She’ll continue commuting to her Pioneer Square studio no matter if an exhibit deadline is looming or not. She described her drive to create as a door she won’t be closing again, which is good news for audiences craving an artist making compelling art.