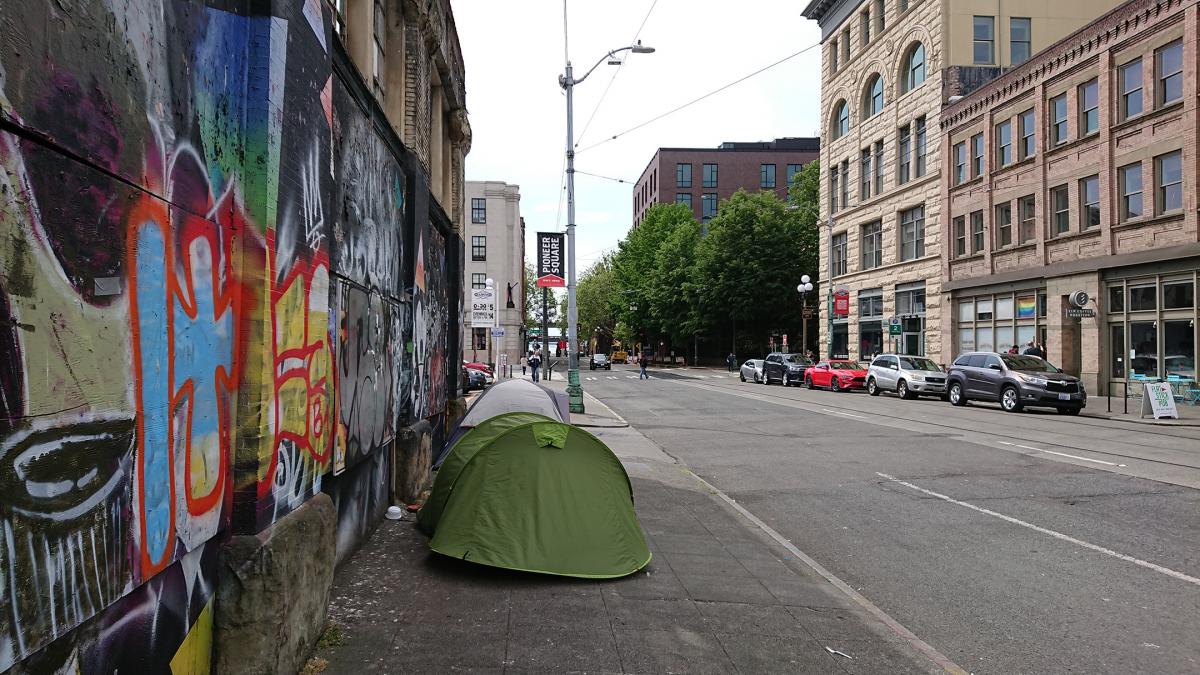 File photo. Tents line a section of Main Street in Pioneer Square. Unauthorized encampments are often swept which reinforces the instability they are already facing.

Compassion Fail: Housing is a human need, not a reward

I was getting coffee with a friend recently; we have both worked in social services and were commiserating about the totally inhumane notions many of us hold under capitalism about fellow human beings who do not have money. “If poor people would just get a job, they wouldn’t have to sleep outside.” “People living outside did something to deserve punishment.” “Poor people are just lazy.” Readers of this paper are probably familiar with such statements.

It doesn’t matter that it would be less expensive to house people than to leave them unsheltered. It doesn’t matter that there is no city in the country where a minimum wage would pay for a one-bedroom apartment or that many people living out of their cars, in tents or other inadequate housing arrangements actually do hold full-time jobs.

It doesn’t matter that there are six times the number of vacant houses in this country as there are people who sleep outside. That our society allows such misery on such a large scale year after year is not just inhumane for the more than 550,000 people who sleep on streets across the country, but for all of us.

Life under capitalism is not just merciless, though. It is also illogical: During our coffee date, my friend reported that one upper-middle-class, White woman she was getting to know said with all seriousness, “The people leaving syringes outside my daughter’s school don’t deserve to be housed.”

Let’s put aside the questions of whether a safe place to sleep at night is something a human being should have to work for and who gets to say when they’ve “earned” that right.

The punishment this woman is proposing — that of being refused housing  — will keep them in the exact circumstances that endanger her child. The lack of logic is almost as mind boggling as the extent to which many dismiss unhoused people as less “deserving” of housing than the rest of us, as if a safe place to sleep (one of the most basic human needs) should be earned.

Here’s the point: Even if you don’t have it in you to care about your fellow human beings who live outside, you should want to house people for your own self-interest. You should want to live in a culture that values providing everyone with a safe and sanitary home. How well would you fare if you had a medical emergency that was completely out of your control (an accident, for example, or appendicitis), or if you suddenly lost your job? Now imagine that you had no personal safety net: no friends’ couches, no parents to spot you a month’s rent.

If you really think that people living on the streets are dangerous (as opposed to, say, White, radical, nationalist males with military-grade weapons and cheap ammo, just for some perspective), you should want those “threatening your safety” to have their own place to go and dispose of their syringes.

What they deserve is our acknowledgement of their existence, our compassion toward them, and our relentless rage toward a system that would produce such a stark, vicious and irrational “us v. them” mentality.

Regardless of our past sins, bad choices and mistakes, we all deserve safe, adequate shelter. We all deserve to be regarded as fully human. And we all deserve better than the brutalizing system of capitalism that is failing more and more of us all the time.

Megan Wildhood is a contributing writer for Real Change, advocate in the mental health community, published poet and essayist living in Seattle.