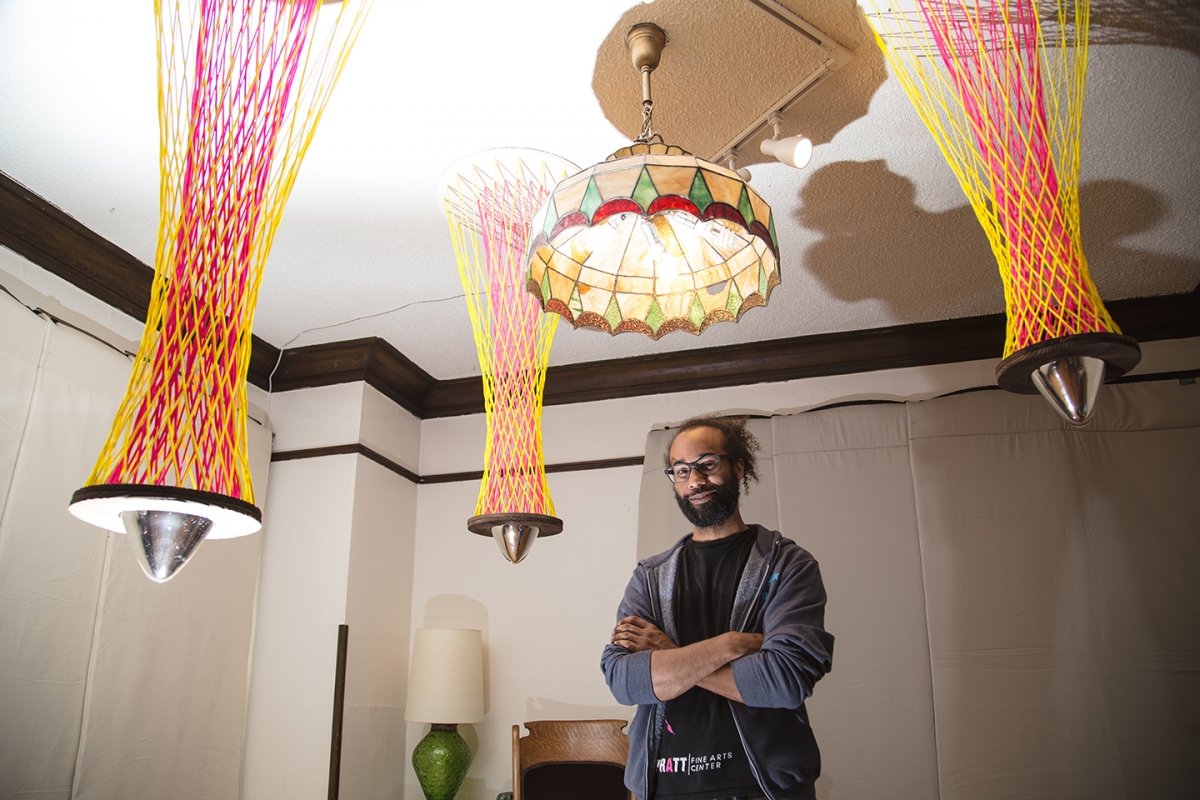 Neon colored paracord. Orbicular cut wood. Cone-shaped blown glass. Those three elements may not appear to traditionally pair well with each other but artist Henry Jackson-Spieker merged them to create a harmonious sculpture. Several of them hang from the ceiling of two, first floor spaces of Wa Na Wari, a newly opened Black cultural arts center in the Central District. As a whole the sculptures are a site-specific installation titled “Points of View.”

“I was trying to have it be where you did have to actually interact with them,” said Jackson-Spieker. “You couldn’t just walk under them and not really notice them. I wanted people to actually have to walk around them.”

The sculptures highlight different areas of Wa Na Wari, one of many family homes bought by the grandfather of artist and filmmaker Inye Wokoma. Jackson-Spieker’s work hangs in the former living and dining room, two areas where family and friends would often meet. The space is still for community gathering; only now everyone visiting the home is connected through a fondness and curiosity for visual, spoken and musical art.

The bright yellow and pink paracord in Jackson-Spieker’s sculpture represents the idea of tension of how the space has changed. At the bottom is a glass cone with a mirrored surface. When visitors peer closely, they’ll see a distorted image.

“I wanted to play off of that both internal external reflection of the space and you in the space and how it’s changed over the years,” said Jackson-Spiker. “And then, as a broader kind of point, is how the community — the Central District — has changed over years.”

Curator Elisheba Johnson described Jackson-Spieker’s work as holding a balance between being intricate, delicate and personal.

She gave him free reign of the space and is pleased with what he crafted.

“The result are these beautiful pieces, that continue his investigation of the materials of glass, wood and paracord, interwoven in the unique history of the home that Wa Na Wari is in and how memories can be revived through objects,” said Johnson.

The sculptures are intriguing and fit in the home as if they’ve always been there, greeting all who enter. He’s one of five artists exhibiting at Wa Na Wari.

Jackson-Spieker is a Seattle native and began exploring his creative side at a young age thanks to encouraging parents. His father worked as a librarian in the Seattle Public Library system, while his mother is a professor at the University of Washington. Both understood the value of encouraging children to explore.

Jackson-Spieker’s art study began with classes at Coyote Central, an organization on a mission to spark creativity in young people. At 13, he started taking glass blowing and welding courses at Pratt Fine Arts Center. He connected with the opportunity to work with his hands and kept going back for more classes. When he wasn’t in school, he was likely in a class at Pratt.

After high school, he enrolled in Western Washington University and majored in art.

He learned bronze casting and also focused on fiber art, which included making paper. Among all the mediums one can master, the tactile nature of sculpture is what best suits him.

“My mind just kind of works much more like a three-dimensional, spatial, visual awareness than two dimensional,” said Jackson-Spieker. “I want to really be able to manipulate it and see it in three dimensions.”

After graduating with a bachelor of fine arts in 2013 he returned to Seattle.

He’s also back at Pratt, but now he’s an instructor teaching a beginning glass-blowing and intermediate bronze-casting class. He’s enjoying sharing his expertise with others.

Teaching has also helped him as an artist, “It allows me to understand the material in a very different way where, I know what I’m doing but then right after I have to explain it to someone in a way that they can understand it completely makes it, kind of relearned the material.”

The experience has also sparked interest in potentially obtaining a masters and teaching on the college level.

In 2017 Jackson-Spieker completed the Seattle Public Art Boot Camp with the Seattle Office of Arts and Culture. That experience, coupled with working with other artists, expanded his view of the types of work artists can pursue.

Wa Na Wari isn’t the only place to see Jackson-Spieker’s work. He has a piece titled “Burl” at Seattle Center in the founder’s court. He used steam to bend the wood and create the curved sculpture, which surrounds a pole. It’s the merging of a manmade structure with a natural element and represents the evolution of Seattle.

“These two contradicting forms of nature and this modern city coming together and clashing,” said Jackson-Spieker. “As we’re expanding out into more and more rural areas and farmland and even forests.”

In addition to clocking hours in his own studio Jackson-Spieker works with other local artists. He's one of two studio managers for artist Marela Zacarias, who is currenlty working on five large scale sculptures for the new international terminal at SeaTac airport.

When Grade made an installation for The World Economic Forum in 2017, Jackson-Spieker also traveled to Davos, Switzerland for the event.

He described it as amazing and interesting to be in the midst of the world’s most powerful people.

Since graduating, the multidisciplinary artist has presented his work in numerous exhibitions here and in New York, won awards and completed residencies. Finding a way to thrive in Seattle, a city where the cost of living is constantly rising, is a challenge for many. Jackson-Spieker is undeterred.

Being an artist is who he is and working with his hands in the studio is where he belongs.

Given the quality of his work coupled with his commitment, this is likely just the beginning of a long arc of engaging work.