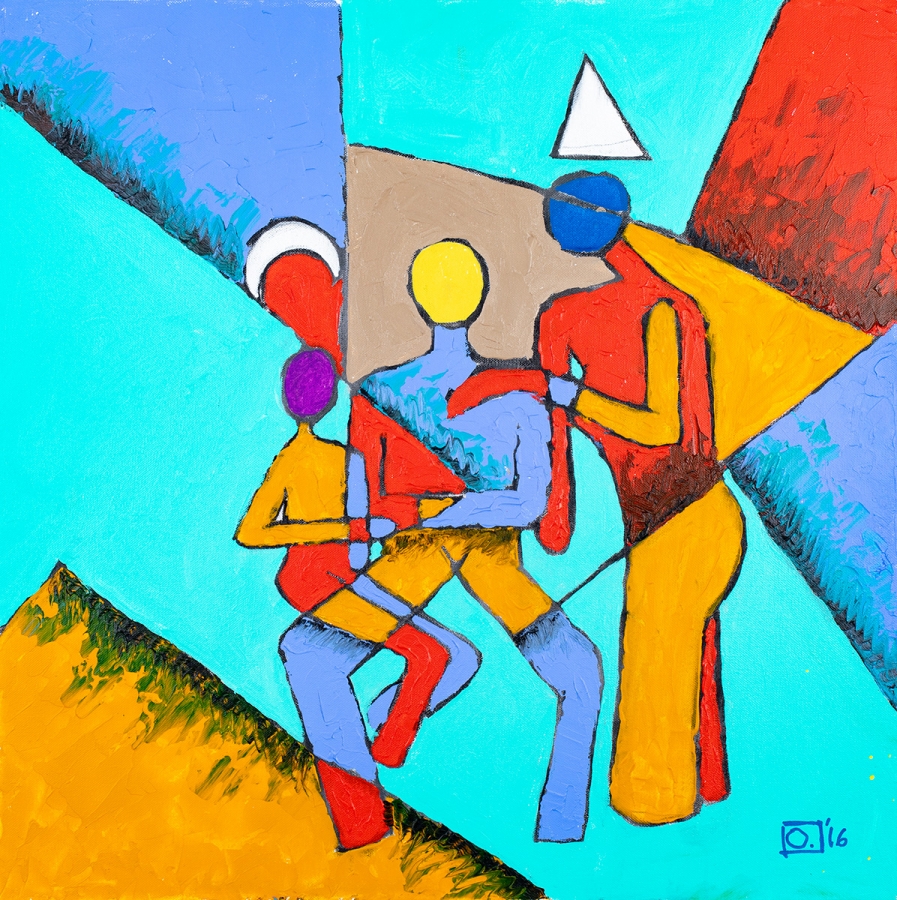 When Osa Elaiho enters his studio in the early morning hours of the day, he begins with a routine before making a brush stroke on the canvas. First, he starts with a prayer. Next up is music to set the tone. His taste ranges from composer Antonio Vivaldi to Burna Boy, an Afro Fusion singer and songwriter who has two songs on the new “Lion King” soundtrack. Each chord fuels his ingenuity. His passion for music is as strong as his love for creativity.

“It fuels my spirit,” said Elaiho. “Without painting imagine a candle with no flame. After painting you have this like burning bush that’s consumed.”

Elaiho is also juggling the responsibilities that come with working full-time as a senior program manager at a tech company and his family. He says spending time in the studio makes him a better and more present husband and father.

Elaiho is currently showcasing several of his notable mixed media and acrylic paintings at Columbia City Gallery in the group exhibition “Que Séra Séra.” Faith and family are the pillars of his work. The Nigerian-born artist incorporates his culture as well. Among the works is “David on the Sax.” In it, a monochrome figure plays the saxophone. The artist also incorporated tribal cloth he bought from a street vendor in Lagos, Nigeria during a recent trip. Fela Kuti is a source of inspiration for “David.” Kuti is a pioneer of the genre Afrobeat, the fusion of African beats with hip-hop and jazz. Elaiho said the piece was also inspired by the biblical story of David playing an instrument for Saul to rid him of evil spirits.

“Grandmother in Benin” is a portrait of his late grandmother. The gold Victorian baroque frame surrounding her is opulent and signals to viewers that she’s someone of prominence in his life. He used orange and red to symbolize her devotion to service. She wears a headscarf called a gele and is set against a purple background to illustrate her royal lineage. Elaiho described her as a strong disciplinarian who raised 10 children. He misses her to this day, years since her passing.

“Really what inspired me was to have some sort of extension of her essence around,” said Elaiho. “She was really a powerful matriarch.”

“Efe – Keep Me Grounded” reflects the relationship he has with his son whose name is in the title. In it, 12-year-old Efe’s chin is tilted slightly upwards. He described it as symbolizing a contemplative seeker in the quiet hours. Family is the most precious thing to Elaiho.

“At the end of the day, no matter what sort of day I’ve had, no matter where I’m at or how I feel, when I come back to my son and he gives me a hug. Or he jumps on me. Instantly, I’m grounded,” said Elaiho. “When life is trying to push me away or when I feel I’m kind of flying away. I just have to kind of come back to what’s real and it’s my family.”

Elaiho’s path to art began a bit unconventionally, in that he admits he started drawing out of boredom. The monotonous activity evolved into a passion that he’s nurtured over the years. He took art classes in school but didn’t formally study. Instead, he focused on computer engineering at the urging of his parents. Elaiho said his father was an artist, too, but his parents ran a printing press to support the family. He was expected to take a more traditional career route in part because they sent him to school abroad.

Elaiho worked in the tech industry in Dublin, Ireland before relocating to Seattle in 2002. Amid moves and life events, art has stayed in his purview.

Elaiho has an appreciation for the late Nigerian painter and sculptor Ben Enwonwu, “He understands Nigerian tradition so much and how he puts that on paper or canvas. That transformation in a simplistic way is really what I liked about him and his art.”

Enwonwu’s work is highly regarded. According to ArtNet, the painting of Nigerian royal princess Adetutu Ademiluyi, titled “Tutu,” sold at auction for $1.67 million last year. Prior to the sale of the painting, which is commonly referred to as the Nigerian Mona Lisa, it was thought to be a lost masterpiece.

When it comes to his own work, the goal isn’t just to make aesthetically pleasing art, which he excels at. He wants audiences to connect with the work in their own way — to bring personal experiences to individual interpretations. He wants viewers to have a deeper appreciation for what they have. Elaiho’s art is relatable and his talent shines through with each work.

After “Que Séra Séra” wraps up near the end of the month, his work is headed to West Elm. Elaiho has significant plans for the future. It includes holding an exhibition in a museum, opening a gallery and eventually an art school. He wants others to feel the power of creative endeavors.

“I think art can transform people,” said Elaiho. “I know this because I’ve experienced it myself.”