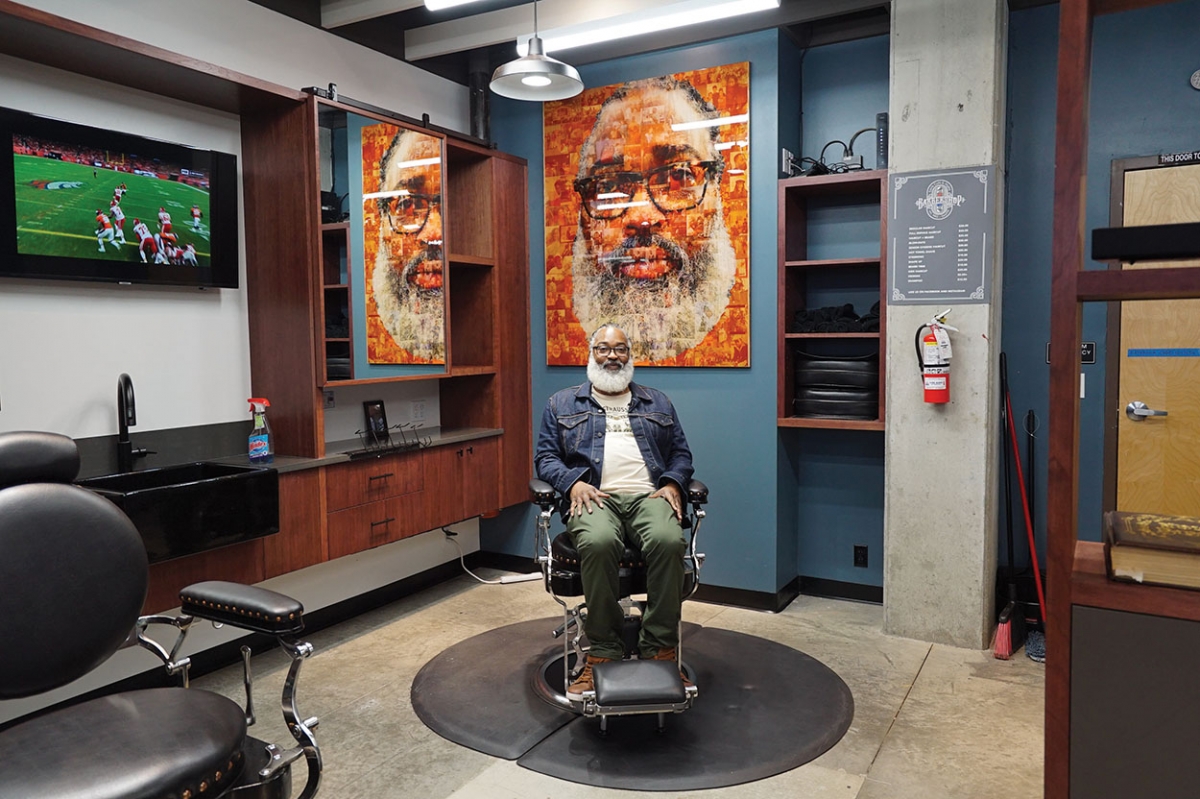 Earl Lancaster, of Earls Cuts N Styles Barbershop, sits in a barber chair at his new shop at the Liberty Bank Building in the Central District. Photo by Susan Fried

Earl's new look: Landmark barbershop back at 23rd and Union

Beginning when Earl Lancaster was 22 years old and for nearly 30 years, his barbershop at 23rd Avenue and Union Street was integral to a historic part of Seattle’s Central District.

He was displaced from the bygone Midtown Center, which also held the post office, and promised a space in a mixed-use development across the street, to the northeast of 23rd and Union.

The new building’s website says, “The re-development of Liberty Bank helps preserve affordability in the neighborhood by bringing 115 units of much-needed affordable housing. Rents for one-bedrooms range between $448 to $1,013, depending on income.”

“It was for certain I was going to get the spot, but it was trying times in between them saying I could have it and it happening,” Lancaster said.

It has come to pass. Earls Cuts & Styles moved into the revamped Liberty Bank Building and held an Oct. 17 reception, where people enjoyed food from local businesses.

Lancaster got a little emotional when talking to old friends Thomas and Melissa Bangasser, whom he has known since the early ’90s. Thomas Bangasser owned the Plaza building that housed Lancaster’s barbershop.

The Bangassers, along with half a dozen more longtime friends of Earl’s, were there to celebrate its “grand opening.”

Lancaster talked about how grateful he was to the community for supporting him and his business. He acknowledged the presence of Wyking Garret from Africatown, saying how dedicated Garrett was to the Black community, the Central District and to businesses like his.

When he said, “I’m just a barber,” the people responded with how much more he is to the community. Thomas Bangasser announced, “Earl’s the Mayor of Midtown,” and everyone agreed.

People of Africatown and Seattle University were active in securing the new spot for Earls. “I was confident in the people who were helping me,” Lancaster said. “They made the transition very smooth.”

For the past six months, Lancaster operated from The Central, another mixed-use building, on the southwest of 23rd and Union.

“And I want to do more here. A lot of people want to cut hair these days, so I want to open a school.”