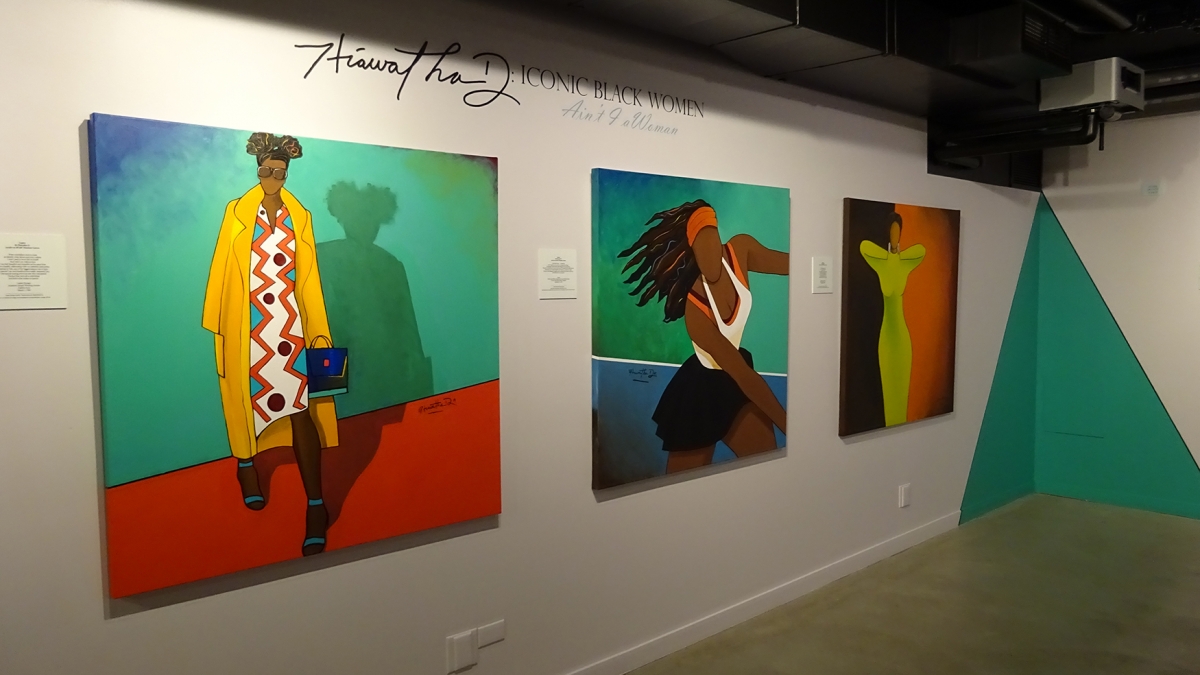 “Iconic Black Women: Ain’t I a Woman” offers visitors an immersive visual experience of a group of leaders who embody tenacity, fortitude and inspiration. The collection of paintings depicts notable Black women who have defied the odds and commanded respect for their achievements. The latest exhibition at Northwest African American Museum (NAAM) is a vivid tribute. It begins with abolitionist and activist Sojourner Truth and ends with Olympic gold medalist Simone Biles. Each woman in between is unique and praiseworthy.

In all of his acrylic portraits, Hiawatha D. perfectly captured their essence. So much so that those familiar with whom he’s painted won’t need to read the information card to figure out who they are. Oprah is shown in the soft pink ensemble she wore to Prince Harry and Meghan Markle’s wedding last year. Congresswoman Maxine Waters is “reclaiming her time”: glasses on the brim of her nose, bangs swept across her forehead and eyes staring directly into the viewer, requiring their attention.

Former first lady Michelle Obama is accompanied by her daughters Sasha and Malia. The trio are wearing knee-length winter coats. It’s a snapshot of a historic moment: the second inauguration of President Barack Obama. In Nina Simone’s portrait, it’s as if she’s taken a brief pause before belting out the lyrics to “Feeling Good.”

Hiawatha created the works to celebrate Black women and to acknowledge their accomplishments. He doesn’t want fleeting fanfare for Black women; he’s more interested in sustained recognition for how they better society.

“It’s powerful,” Hiawatha said. “It’s by us and about us, and we do great things. We’re a brave people. We’re beautiful people. We are creative people and we need to celebrate that.”

Hiawatha began creating the series of two dozen paintings earlier this year. He was in South Africa for two months and spent time on the East Coast while working on them, but finished just in time for the opening earlier this month. The initial plan was just to start with 15. Now his plan is to expand the total number to 50.

The works are arranged in the gallery to honor ancestors, elders and queens. The paintings are connected with varying hues of red, yellow and blue. The bold colors help bring each painting to life.

Usually, Hiawatha doesn’t include faces, hands or feet in his paintings. His reasoning, in part, is because the viewer can take the features too literally. The artist also uses several different techniques: abstract, cubism and surrealism. Missing hands and feet aren’t immediately noticeable, which speaks to Hiawatha’s talent. It also makes the works universal.

A friend of his got a glimpse of one of the portraits during the creative process, and she said, “That’s not Michelle Obama — that’s me, and I don’t know how you captured me. That’s me.”

“First, I thought she was kidding, but she was serious,” Hiawatha said. “She really felt that was an image of her. That’s a blessing. I don’t think there’s any way I could just predict that or arrange that. That’s just something that happened.”

The artist did make a few exceptions for the iconic Black women series. In the portrait of “Unbought and Unbossed” Shirley Chisholm, he painted facial features to go with her short, curled hair and the geometric pattern accent on her shirt. The first Black woman elected to Congress flashes a smile. After making history in 1968, she did so again four years later when she ran for the Democratic presidential nomination. The painting is one of the artist’s favorites.

The exhibition also features several paintings depicting different aspects of the life of a Black woman and livingware, hand-painted ceramics.

The title “Ain’t I a Woman” is the name of the speech that Truth delivered at a Women’s Rights Convention in 1851.

Adding to the canon
For the past 30 years, Hiawatha has been a working creative. He’s shown in dozens of group and solo exhibitions. In the early ’90s, he ran a gallery and coffee bar. While people loved his paintings, he also became known for his cups of java. The business has long closed, but he’s still praised for his barista skills.

The Seattle native also worked in graphic design, taught painting to aspiring artists and served as a mentor.

Today, he’s back to painting full time. The living room of his home doubles as a studio, and he prefers painting on the floor versus using an easel. While most of us are fast asleep, Hiawatha is just getting started. He likes to paint after midnight and into the early hours of the morning.

The result of those late nights is an exhibition of enthralling works that offer a worthy perspective. The works have resonated with people outside of the Emerald City and the artist is in talks to show them at other museums around the country.

Defining portraits
In a larger scope, Hiawatha’s works represent the same determination of the women he’s exalted. He wants youth to know they can be successful by creating their own brands and products without working for a major corporation.

When Hiawatha talks about “Iconic Black Women,” he refers to it as a collaborative effort. His wife Veronica Very and NAAM Curator Hasaan Kirkland were integral components in bringing the show together.

“This body of work, it has been a movement of energy,” Very said. “I think as such will make this a healing portal for meditation and inspiration and activation of more iconic women in America.”

As feedback from the show comes in to Hiawatha, it’s been a reminder of the profound impact art can have on audiences.

“I didn’t expect the reaction that I’m getting from people and it’s emotional. It’s ‘I needed this,’ ‘thank you for painting Serena Williams, I see myself in her,’” Hiawatha said. “The art is just uplifting.”