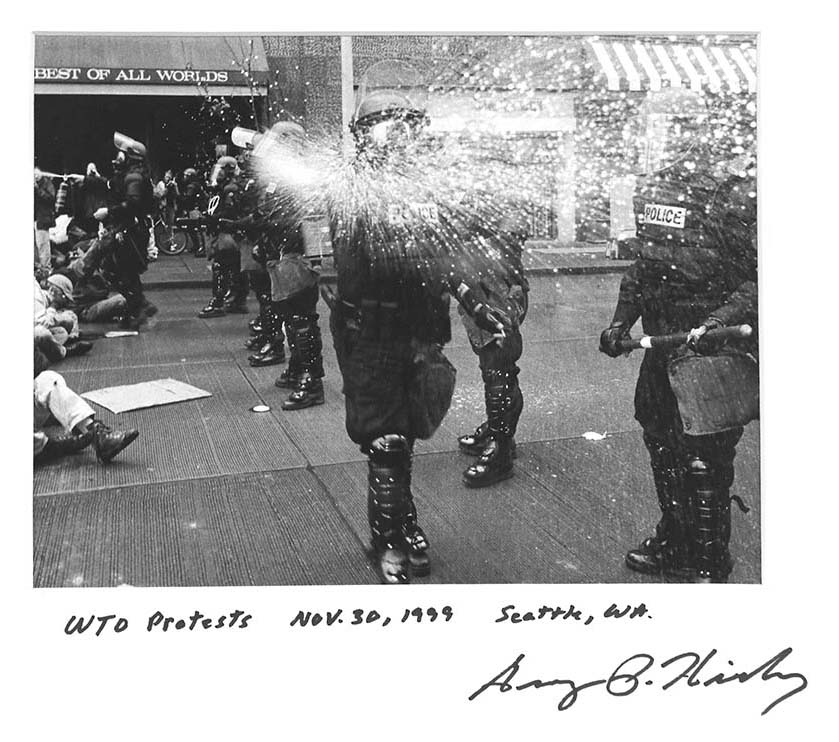 This is what victory looks like: Why we celebrate WTO+20

There are tens of thousands of stories to tell about the 1999 Seattle World Trade Organization (WTO) protests — at least as many as there were people marching in the streets, locking down key intersections downtown and in educational forums throughout the city that week.

Both of our organizations came out of those heady times, and we will mark the anniversary with two events to uplift the historic victories and reignite the energy of the 1999 protests, and channel this toward building a better economy and planet than the WTO envisioned.

On Nov. 30, 1999, 80,000 protesters took to the streets in what was christened the Battle in Seattle. The protests marked a time when groups organizing around multiple issues came together to stand up against the WTO and formed uncommon alliances, famously represented by the Teamsters and the Turtles. Labor unions, environmental advocacy groups, human rights activists, food sovereignty advocates, public health activists, anti-war activists and others coordinated over many months with the goal of shutting down the WTO ministerial meetings.

The Direct Action Network called for “Mass Non-Violent Direct Action” in their broadsheet, naming war, low wages, deforestation, gentrification, genetic engineering, global warming, more prisons and sweatshops as just a few of the reasons that “tens of thousands will converge on Seattle and transform it into a festival of resistance.” Months of organizing and direct-action trainings made this vision a reality: On Nov. 30, the WTO was prevented from launching the ministerial when thousands took strategic intersections while others locked their arms around the convention center, physically preventing delegates from entering.

Meanwhile, tens of thousands converged downtown from multiple points around the city, including students and people-of-color-led marches, and a rally sponsored by the AFL–CIO, the largest U.S. federation of unions, where labor leaders from around the world spoke out against the WTO, and in favor of international solidarity.

Shutting down the WTO on N30 wasn’t our only victory. After a tumultuous week — that saw President Clinton call in the National Guard, the Seattle police unleash multiple weapons against peaceful protesters and hundreds jailed, making international headlines — something unexpected happened. The WTO meetings collapsed. The protesters made it possible for Global South delegates inside the meetings to challenge the negotiations and stand up for their countries’ best interests.

The next round of WTO meetings stalled as well, and after years of opposition and organizing, the global trade justice movement defeated the Free Trade Area of the Americas in 2005 and the Trans-Pacific Partnership in 2016. The Seattle WTO actions bloomed into the World Social Forum that began meeting in 2001.

Even with these wins, everywhere around us we see devastating consequences from the policies promoted by the WTO, World Bank and International Monetary Fund. As Victor Menotti (former executive director of International Forum on Globalization) stated, “Today, countless countries are experiencing ongoing popular protests against global free trade’s resulting economic inequality, austerity, and political corruption, including: the U.K., France, Chile, Colombia, Peru, Ecuador, Hong Kong, Iraq, Iran, Lebanon, Georgia, and Algeria.  While misreported as mere ‘anti-government demonstrations’ many of them are in fact uprisings against the very policies prescribed by the international economic institutions enforcing free trade and advancing global capitalism.”

These lived experiences show us that regardless of what neoliberalism claims, markets cannot in fact solve all our problems. Now more than ever, we need to be reminded of the victories that we won when people joined together in a popular uprising against the WTO. We must renew the momentum generated by the WTO protests, and call attention to the ways our domestic legislation mirrors the harmful policies being pursued globally. Do we want economic policy domestically or globally that squeezes us with downward pressure on wages, restricts our control over our own food systems, deregulates pharmaceuticals we need to stay healthy and limits our ability to address climate change? Or, do we want political and economic policy that allows us to address these issues democratically and locally?

We achieved something else on those cold, rainy November days: We tasted liberation, experienced collective solidarity and felt radical hope for a new world.

On Nov. 30 and Dec. 7, join us to rally, march, create dialogue, tell stories and learn about direct action and current social movement organizing. And join us for the long-term struggle against neoliberalism and for global justice!