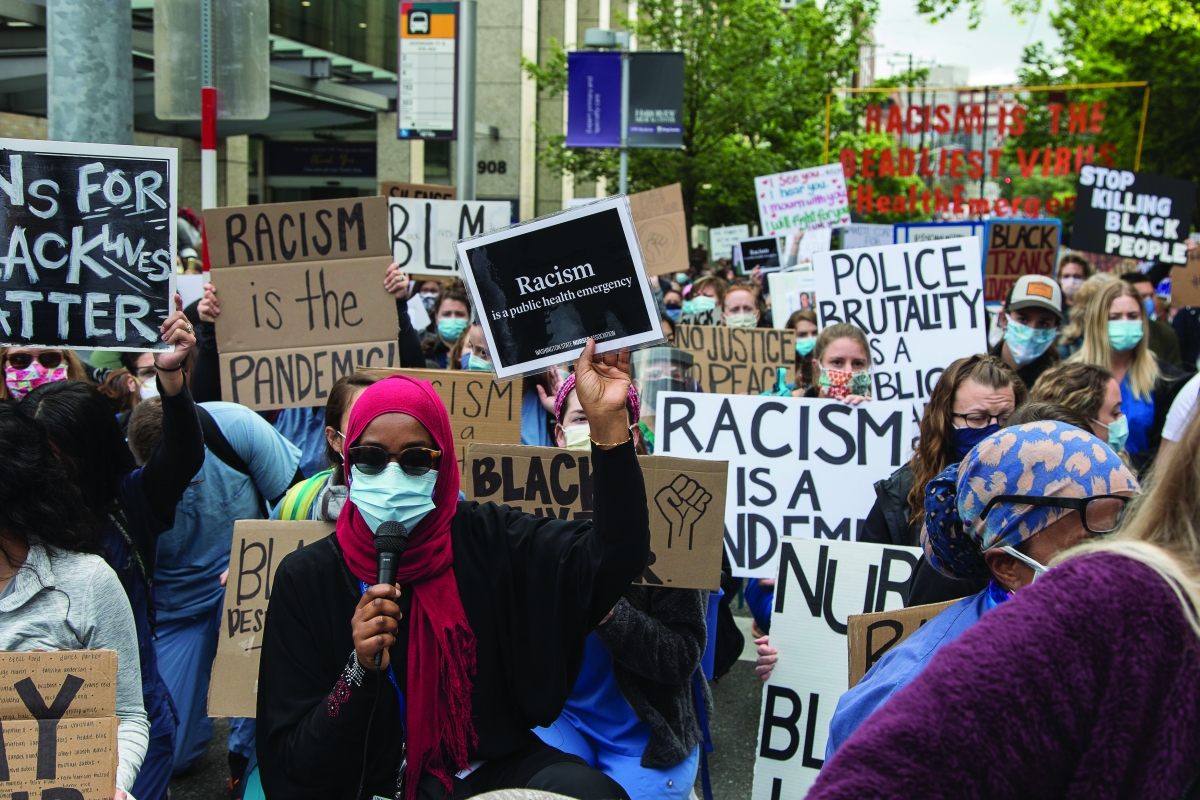 Salma kneels with the crowd outside Harborview Medical Center during the June 5 Doctors for Justice March in Seattle.

The counter at the bottom of the Seattle Channel livestream began ticking upward as the clock passed 9:30 a.m. June 8, when the Seattle City Council would meet for its weekly Council Briefing. A few dozen viewers became a few hundred, eventually topping out at just past 800 people watching what would normally be a simple prequel to the 2 p.m. full council meeting.

But, after the events of the weekend, Seattleites knew that their City Council would have something to say.

Protests over police brutality in the wake of the killing of George Floyd by the Minneapolis Police Department that began in earnest on May 29 entered a new phase as participants moved past expressions of sadness and rage to concrete lists of demands: defund the police department, put resources into social services, declare racism a public health crisis and more.

Mayor Jenny Durkan and Police Chief Carmen Best agreed to one: banning the use of tear gas, a chemical that irritates the lungs in the midst of a pandemic that also targets that organ. That promise lasted for one day before police unleashed so much gas on protesters that June 7 evening images from 11th Avenue and East Pine Street are obscured by a chemical fog. Protesters had amassed on the blocks surrounding the 12th Avenue police precinct for days.

It was a tipping point.

“I think the mayor should assess in this moment, ask herself if she is the right leader in this moment — and resign,” Councilmember Teresa Mosqueda said at the briefing the next morning.

Over the course of the three-hour briefing, three council members said Durkan should at least consider resigning, a nod to the growing pressure on the mayor and discontent with how protesters have been treated over 10 days of protests. Multiple online petitions totaling more than 12,000 signatures made the same demand.

A statement from Durkan’s office said that the mayor would “not be distracted” from the work of addressing systemic racism in the city and healing the community.

“At this pivotal moment, we cannot fan division when we need to come together to make actual steps on policing, invest in community, safely reopen our city to get workers back to work, and address the inequities in every system, including in education, housing, access to wealth building jobs and the criminal justice system,” the statement reads.

But temporary, and porous, bans on chemical agents and the decision to rescind a request to weaken the oversight of the Seattle Police Department (SPD) did not appear to tamp down the uprising within the community.

Demands for Durkan’s resignation were building for almost a week before the Council Briefing, part of a growing body of changes that progressive leaders throughout the community began calling for to envision a new system of public safety, one rooted in ending the oppression of marginalized communities and removing the conditions that lead to crime.

Community members including activist and attorney Nikkita Oliver took the conversation to Durkan in a livestreamed meeting at City Hall in which the activists presented their platform: Defund the police; Invest in community solutions; Stop prosecuting protesters. When Durkan went outside to talk with protesters, she was booed off the steps — she had not immediately agreed to any of the demands, but did later announce with Police Chief Carmen Best a restriction on black mourning bands that covered police officers’ badge numbers.

A teach-in organized by Africatown at 23rd Avenue and East Union Street, in the heart of Seattle’s historically Black central area, added more concrete demands to the list to bolster the Black community: Hand over various properties, such as the decommissioned Fire Station 6, a vacant Sound Transit lot and the former Paramount Nursing Home for community purposes; Strip $180 million from the Seattle Police Department budget; redistribute $50 million to Black-led organizations; End police presence in schools.

They went even further, calling on the city to end violence against protesters, reverse the militarization of the police department, stop violent policing of marginalized communities and eliminate provisions in police union contracts that protect officers who commit acts of violence against community members.

While the asks targeted policing, the underlying conditions that people are fighting goes deeper, said Dr. Shaquita Bell, who was on call at the time.

“Racism is a disease,” Bell said. “For all of you who went to school to save lives, it is our job to treat that disease.”

Roughly 30 hours later, the community would gather again, this time in the south end, for another march from Othello Park to the Safeway parking lot — areas that have become the new home for Seattle’s people of color. City council members who attended called it “joyous,” far from the violence and chaos that would erupt in Capitol Hill outside the SPD precinct that evening, leaving one man shot and hundreds — including Councilmember Kshama Sawant — suffering from the effects of chemical agents.

Each day was a new, peaceful action, and each night ended in a standoff outside the East Precinct. Chief Best announced Monday that SPD would cede the building after removing all valuable or personal items.

But little could be done to placate council members Monday.

“The tactics used in Capitol Hill are tactics that are prohibited in other countries,” Council President Lorena Gonzalez said. “This is the time to rise to the occasion and say, ‘Basta, no more.’”

Mosqueda, who chairs the budget committee, announced more than her desire for Durkan to consider a stage-left exit. Mosqueda also said she would look for a 50 percent cut in SPD’s budget after a forensic accounting of the department’s allocation and spending. SPD budgets have been a “black box,” she said.

“How much did this escalation cost us? How much are we spending on tear gas?” Mosqueda asked. The city is already facing a $300 million budget shortfall as a result of the coronavirus, and the 10 days of policing may be exacerbating the problem.

Several council members also discussed legislation to cement concessions that Best and Durkan had already announced, specifically around the placement of mourning bands and the use of chemical agents and other “less lethal” uses of force on the part of SPD. The prohibition had unforeseen holes, Councilmember Lisa Herbold said.

“We now know the exception to that 30-day ban [on tear gas] is at the order of the chief,” Herbold said, concluding that the use of chemical agents on Sunday night must have been approved by Best.

The council will soon begin reviewing adjustments to the budget, and Mosqueda set a six-week timeline to analyze SPD’s budget and come up with changes to the department’s activities by July 17. The council is circulating a letter calling for Seattle to drop its litigation against King County’s new inquest process into deaths at the hands of law enforcement.

It’s a far cry from the infamous “Seattle Process” of endless talk and little action.

“This feels different,” activist Thelben Mullett said while speaking to a crowd at City Hall June 6.

Maybe, this time, it will be.