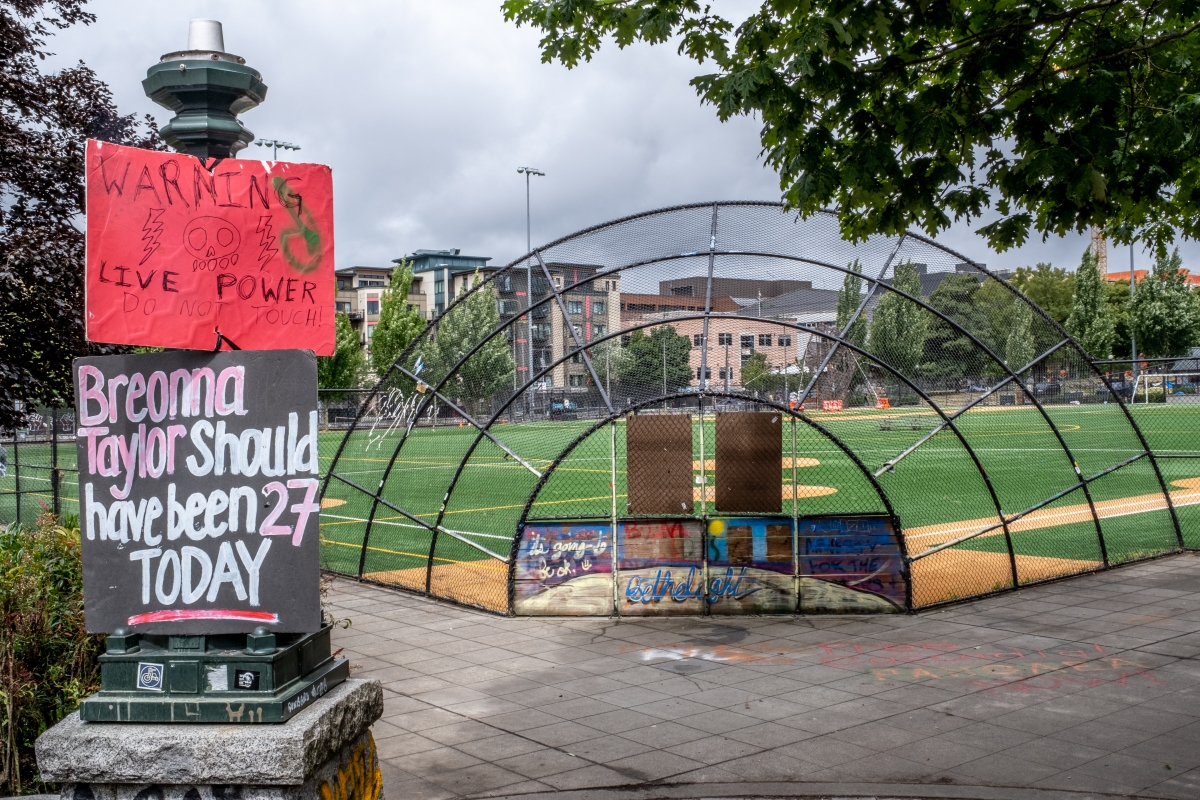 City of Seattle officials cleared the Capitol Hill Occupied Protest (CHOP) in the early morning hours of July 1 after weeks of an organic community claiming the area, rallying around three core demands: defund the Seattle Police Department, invest in community organizations and free all protesters.

After shutting chop, Durkan promises $100M and follow through to BIPOC communities

Seattle’s mayor, Jenny Durkan, approached the podium to discuss the clearance of the Capitol Hill Occupied Protest (CHOP), an order her police officers had executed that morning. Two people had been killed at or near the occupied section of Capitol Hill, which had been transformed into an organic community connected by demands to defund police and invest in community-based alternatives. That violence was used as a partial basis for ending CHOP in its current form.

But, Durkan was quick to say, the protest had not gone unheard. She promised a $100 million investment in Seattle’s Black, Indigenous and POC communities and the swift transfer of three buildings to community ownership.

“For the last year, we have been working to return legacy properties to Black ownership. These include Byrd Barr Place, formerly known as camp, and the Central Area Senior Center. We have been in close communication with Africatown about them acquiring Fire Station 6. Last week, their architect and the city had a walk through the facility, and we look forward to continued discussions.

“Community leaders have stated that the long process is part of the problem, and I agree. We are going to expedite it,” Durkan said.

However, leaders of three of the organizations negotiating those transfers say that challenges remain.

The Central Area Senior Center (CASC) — also known as the Central — sits atop a hill in the Leschi neighborhood. Its back patio overlooks a majestic view of Lake Washington, a natural feature that the senior center capitalizes on by renting the space out for events like weddings and bar mitzvahs. The site used to be a Jewish convalescent center, but when that was no longer viable, the previous owners began renting it to the Black community in 1968.

The transfer would end that uncertainty and make it possible to take out loans and do improvements on the property. Ideally, Ferguson wants to double the senior center’s footprint so that the organization can host two major events at the same time. They have spent $400,000 on studies over the past five years while they’ve been working with the city on the transfer, including studies on the slope of the hill on which the building sits, the foundation of the building and the parking lot.

One sticking point has been a requirement for affordable housing written into the paperwork.

“Every time the mayor talks about affordable housing, it flies in the face of what we want as members of the Central Area Senior Center leadership and the community,” Ferguson said.

Ferguson thought the issue was settled until June 22, when additional paperwork from the city still included language requiring affordable housing on the site should the senior center decide to redevelop the property.

There is no requirement that the senior center or Byrd Barr Place redevelop, but if they do, affordable housing must be on the site, said Kamaria Hightower, spokesperson for the Mayor’s Office.

“If the CASC plans to redevelop the property in the years to come, creating affordable housing for the community to age in place should be a priority,” Hightower wrote in an email.

While affordable housing is important, so are community centers, Ferguson said. Before the pandemic struck, the Central was a gathering point for members of the Black community who had been forced out of Seattle, Ferguson said. People come from outside the city to see their friends and former neighbors, to eat familiar foods together and spend time as a community.

“Black people and African American people, with their sweat equity, have created something that is one of the last remaining institutions in the Central District that African American and Black people can come to from all over the county for the last more than 50 plus years,” Ferguson said.

Caupain has been working on the transfer of the building that houses Byrd Barr Place for the better part of a decade. The organization needs control of the building to make progress on its capital campaign to improve the building, which is listed as a historic property.

Its age may make it a fixture in the city, but it is also a hazard. It contains asbestos and lead paint, which the organization is responsible for mitigating even though it doesn’t own the building. Caupain also wants to make seismic improvements.

“It won’t survive another Nisqually-type earthquake,” Caupain said, referring to the 2001 earthquake that caused severe property damage in Seattle. The danger is so great that Caupain says if she’s on the second floor during an earthquake, it might be safer to jump out of the window than stay in the building.

The delays in the transfer may cost the organization. The Washington state legislature approved $1.4 million to help cover some of the cost of the seismic upgrades, but Byrd Barr Place can’t claim the money until it controls the building.

The organization has until July 2021 to spend the money, Caupain said, and the goal was to move out of the building so the work could start in January 2021, with the intent to move back in a year later. That timeline is at risk unless the transfer happens soon.

The city intends to fast track the transfer of Fire Station 6 to the Africatown Community Land Trust so that organization can start its own improvements to the building, which hasn’t been in use for several years, Hightower wrote in an email. Those improvements are necessary before the facility can house the William Grose Center for Cultural Innovation, named for a Black pioneer and entrepreneur who helped establish the Central District.

“Expediting” the process means ushering through legislation required to transfer the property.

On June 26, Durkan met with some protesters at CHOP. According to Omari Salisbury of Converge Media, the only media outlet in the room, Durkan referenced the transfer of Fire Station 6 and investments in Africatown projects as part of the actions that the city was taking to address the needs of the Black community.

Wyking Garret, president of Africatown Community Land Trust, tweeted that people need to keep pressing the city on both fronts since the money hasn’t been disbursed and the organization has neither the keys nor the title to the fire station.

Now is the time to make good on these transfers, and without the conditions that run contrary to the needs and desires of the Black-led organizations that have been stewards of the buildings for decades, Ferguson said.

“It’s more than a piece of property,” Ferguson said. “It’s the legacy of people who created homes and community.”