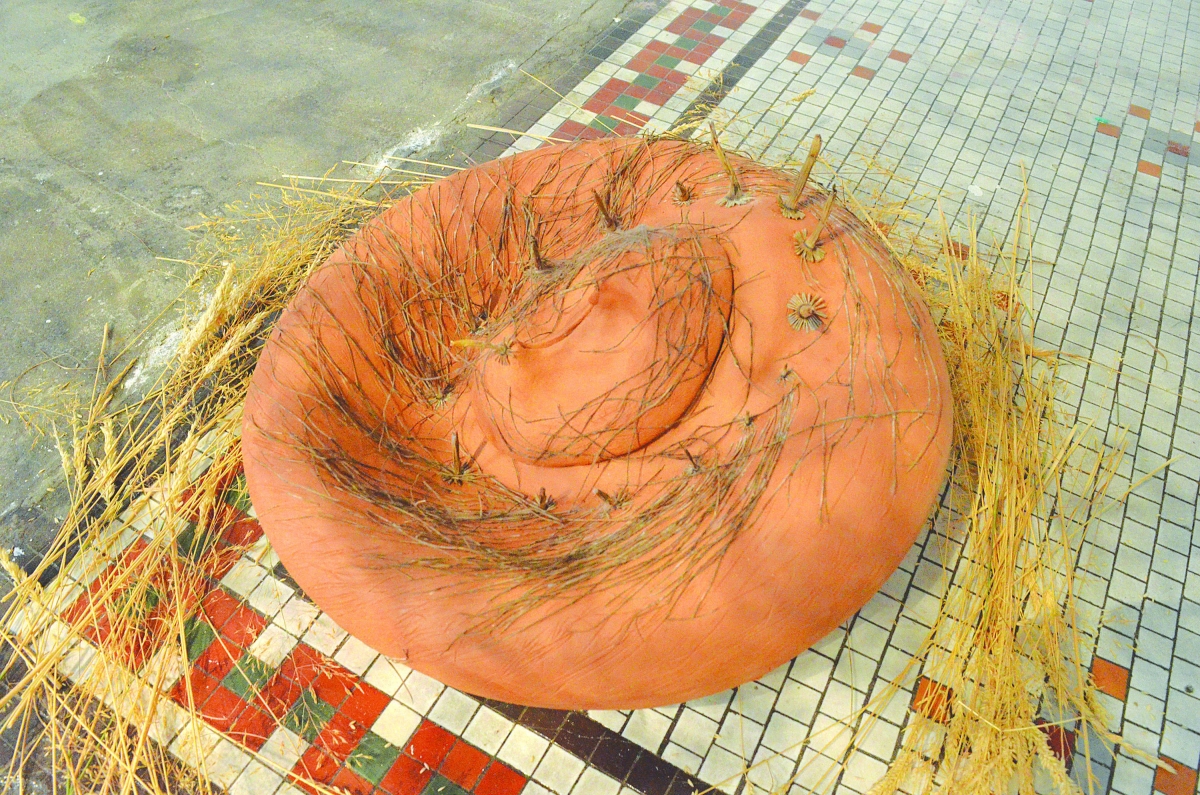 The womb is a collective underworld

The womb is a place of birth and death, holding incredible power to create and destroy. But rarely, if ever, does society want to embrace this truth, instead policing the choices and opportunities available to womxn and womb-carrying individuals. Artist Hanako O’Leary is fearless and bold in her meditation on the possibilities of the womb, feminism and “the underworld” — themes she explores through three-dimensional clay and mixed-medium sculptural work.

Her art is daring and honest in how it portrays the reality of being a female-identified individual today in a society that exploits the definitions and expressions of femininity. Some people have called her works “angry,” even though her explanations and artist statements have little to do with anger and instead probe our avoidant, simplistic conceptions of life, death and womanhood.

O’Leary’s current exhibit, at the Method Gallery in Pioneer Square, is titled “Yomi” — “Land of Darkness” in Japanese. Much of O’Leary’s work is inspired by the Japanese folklore and traditions she grew up with and especially experienced when visiting her mother’s family in Hiroshima, Japan, every summer until she was 18.

When O’Leary pursued her BFA in ceramic arts at the University of Illinois Urbana-Champaign, she yearned to draw inspiration from the cultural influences that had permeated her life. But at the time, the late 2000s, institutional spaces were still shying away from the kind of cultural identity exploration that is gaining momentum in arts education.

“I didn’t really have the language to express why I needed to express myself in that way. I felt like I was coming off as cheesy, or maybe even like I was appropriating a culture that was mine,” O’Leary said. She felt a heavy pressure to impress and fit into the mold of what “good art” looked like.

“I tried to take out that Asian aspect of my work as much as possible,” she said. “It actually took two years after I graduated before I could really start dabbling in that again.”

Now, O’Leary’s work is seamlessly infused with Japanese motifs, whether in its aesthetic presentation or in the themes she explores.

Shinto traditions have surrounded O’Leary much of her life, and she imbibed the Japanese conception of life and death through the traditions and rituals each summer.

“It’s very ingrained in me this idea of the afterlife and ancestors and how it is just as important after they’ve passed that we remember that they were here and what they went through and thank them,” O’Leary said.

This outlook is deeply intertwined with how “Underworld” is a collection of the ancestral knowledge and the lived experiences O’Leary grappled with in her current exhibit.

The largest piece in “Yomi” is a sweeping, hand-crocheted swatch of net that hangs from the walls and ceiling and swirls toward the floor tapering to a point. Think of a portal sinking into the ground, or the inverted conical of a hurricane.

The piece is not only symbolic of a portal to the “underworld” but also holds the lived memory of what was happening at the time when O’Leary was creating the piece. Since moving to Seattle, O’Leary was a fellow at Seward Park Clay Studio. Today she is a fellow at Pottery North West and works in arts administration at Shunpike.

In May, the pandemic had been raging for months and O’Leary’s clay studio was shut down. Without means for tactile artwork, she painted and created other two-dimensional pieces. But eventually, she wanted something sculptural.

O’Leary had three spools of paper ribbon: a material usually used in crafting furniture. At first, she thought she would use it to hand crochet a rug or something that wouldn’t take too long.

At the same time O’Leary was creating this, George Floyd was killed by police and a summer of protest bubbled into momentum. At some point, repetitive motions of hand crocheting became something O’Leary didn’t need to focus on; as she wove, she allowed herself to process the shifting world around her and those thoughts are wound, in a sense, throughout the final net.

“I was thinking about the structures that we build our societies on and the histories that are buried and are celebrated and how we used that as a base to move forward and how intensely connected we all are,” O’Leary said. “Our form as a collective is incredibly malleable and can be used to accommodate all kinds of spaces and all kinds of situations. So, how can we tweak this and hold onto it so we don’t have to keep repeating these things?”

In fact, the portal net almost mimics that desire for malleability — O’Leary displays it in various iterations, and exhibits the potential to be shaped and moved in a variety of ways.

In addition to thinking about larger societal shifts, O’Leary also sees this piece interacting with a journey into the “underworld” — the womb. In her conception, the underworld is a place where living beings go after death, like in folklore and cultural traditions, and holds a collective history, by virtue of housing the life that preceded any point in time.

“It is a palace where we hold not only trauma and pain but also the power and triumphs of being able to overcome that,” O’Leary said. So many stories are buried, hidden away due to shame or social stigma, that we also lose the stories that talk about how to overcome trauma and pain and are robbed of the chance of celebrating such narratives, O’Leary says. She was conjuring what those stories could be that she didn’t know but could feel were there.

The theme of the womb and the underworld it represents came to O’Leary two years ago, after an unwanted pregnancy and the choice to move forward with an abortion. “It illuminated for me how much shame is carried in this ability we have to create life — and with that, we also have the right to deny life — and how intensely society wants to control it.”

The connection to the underworld came through O’Leary’s interest in Japanese folktales, particularly one story about the goddess Izanami, who went from being the Goddess of Life to the Goddess of Death after being banished to the underworld. Her lover attempted to rescue her but lost his way and could not bring her out; while he went on to become the hero of many other myths, Izanami remained — forgotten in the underworld.

That this was a trope and the same common fate that befell many a female protagonist in folklore, didn’t go unnoticed for O’Leary. O’Leary’s struggle through abortion and making the choice to go forth with it became an adventure of self-empowerment.

That is when O’Leary began to use the motif of the female vulva in her work, especially her pottery. “I started seeing the vulva as the entry, this portal, the connection we have in the physical realm into this more sacred, mysterious place that holds life and death and carries our species through all of time,” she said. “I wanted to celebrate it as this god-like place.”

O’Leary has been creating art for as long as she can remember, doodling and drawing in notebooks in school. Working on paper feels for her like a mental exercise akin to writing. Working in the three-dimensional space, however, with sculpture and clay is a much more present and mysterious process for her.

“When I work three dimensionally, especially through a craft where there is an established way to build something that is centuries old, I feel like I’m connecting to something really ancient and really intuitive and there is all this information that is pouring out of me that I couldn’t put into words,” O’Leary said.

When she is working with a material, O’Leary can feel with her hands if the structure of her piece is unstable or imbalanced, even if it looks aesthetically pleasing. That process almost acts as a teacher, and O’Leary is learning how to bring the lessons from her art practice into other parts of her life. “If this doesn’t feel stable, I should listen to that instead of being like ‘this looks fine’” she said.

Another lesson she has learned from the process of sculpture has emerged from the limitations of quarantine and the lockdown following the COVID-19 pandemic. O’Leary learned to work with what was available around her. Without access to a pottery studio, and the firing kiln, O’Leary worked with raw clay in her backyard and incorporated natural elements that were part of the environment.

That idea was inspired by the ancient pottery of the Jomon era in Japan, where artisans used ropes to create patterns on wet clay. “And that inspired me. There was so much greenery while I was working in my yard and leaves would fall onto my pots and I’d get frustrated, and I was like, ‘What if I just worked with them and see what happened?’” O’Leary said.

She collected whatever she could find to imprint designs onto the clay. One of her pieces still has blackberries pressed into the unbaked surface. The whole process allowed her to connect to the physical vessel and what it represents, which for O’Leary is a collective memory. After all, she says, pots and vessels are one of the oldest tools and artforms of human culture.

“I think I kind of see them as urns, vessels that collect the past,” she said.

As the COVID pandemic has upended life and transformed how artists can make and share their work, O’Leary believes this is a time of collective struggle — and by extension, transformation. Part of her philosophy is that art is inspired by challenge and by adversity, and our current time is just that. Once artists and creative people have digested and processed what exactly the pandemic has unearthed, O’Leary believes there will be a bounty of meaningful work to reckon and grapple with.

“When something like this happens, where we are all collectively shaken to the core and are forced to go through some deep reflection and slow down, once the cloud and haze clears out, there’s going to be some amazing visions.” she said.

O’Leary’s work provides a lens with which to view the rapidly shifting world. Our collective underworld has been unearthed in social and system upheavals and shifts. How we navigate the ever-present and changing landscapes will become stories and memorialized in vessels that hold the past.

“Yomi” will be open at the Method Gallery by appointment until Oct. 17.

Kamna Shastri is a staff reporter covering narrative and investigative stories for Real Change. She has a background in community journalism. Contact her at [email protected]. Twitter: @KShastri2